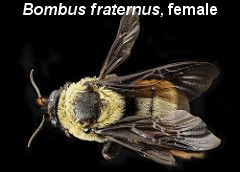 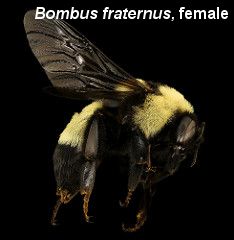 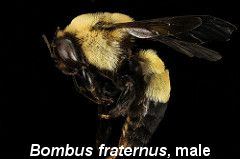 Range: California and Mexico, it is and uncommon species and is usually found in open grassland and scrub. Its favourite flowers include, Antirrhinum, Phacelia, Clarkia, tree poppy, and California poppy.
This species has a short - medium tongue, its hair is short and even, and it nests underground. Body lengths in millimetres, queen 22 - 25, worker 12 - 20, male 14 - 19. Queens are seen from March, workers and males from mid April. 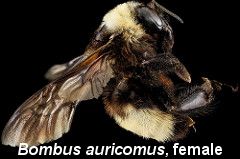 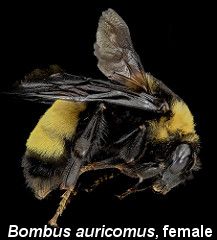 Range: Alaska to California, Arizona, New Mexico east to Wisconsin, Mexico. Found from sea level up to 2200 metres. Favourite flowers include, balsam roots, ceanothus, dandelions, Gypsophila, lupins, thistles, sunflowers and currants.
Long tongued species, hair is short and even. Body lengths in mm, queen 24 - 25, worker 15 - 21, male 16 - 19. Queens are seen from April, workers from May and males from June. Nests are underground and sometimes on the surface. Males will chase anything that moves when searching for mates. 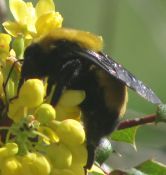 pensylvanicus Range: Quebec, Ontario, Maryland south to Florida, west to Minnesota, S. Dakota, Nebraska, Colorado, New Mexico, Mexico. This is an uncommon species. Favourite flowers include sunflowers, centaurea, thistles, dandelions, vetches, clovers, goldenrod, St. John's wort, Eupatorium.
sonorus Range: Texas, west to California, Mexico
Found in open farmland and fields. Nests on the surface, but occasionally underground. Can be aggressive. Males gather around the nest entrance waiting for the new queens to emerge for mating.
B. sonorus is sometimes known as Bombus sonorus
Long-tongued, hair is short and even.. Body lengths in mm, queen 22- 26, worker 13 - 19, male 15 - 21. Queens seen from May, workers from June and males from July. In the west the males and workers are usually seen a month later than these dates which are for the eastern population. Parasitised by Bombus variabilis. 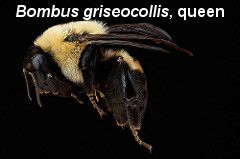 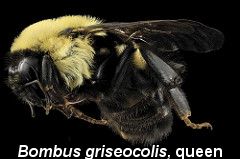 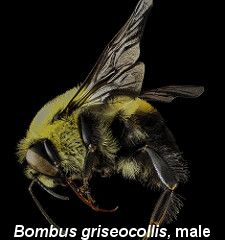