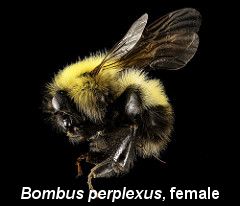 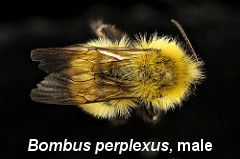 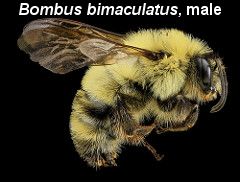 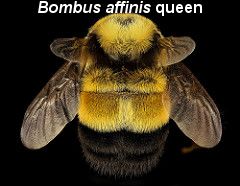 **
Range: Quebec, Ontario south to Georgia, west to South Dakota and North Dakota.
Note: Also known as the rusty-patched bumblebee. Once common, but its range has declined sharply since 1990, now found in only a few areas, and may soon be listed as endangered. Found close to woodlands, parks and gardens. Often has a bald patch between the wings in the middle of the thorax. Body lengths in mm, queen 19 - 23, worker 9 - 16, male 14 - 17. Hair longish and even. Short tongued. Nests underground. Nectar robber. Favourite flowers include; sunflowers, asters, goldenrods, honeysuckle. Nests parasitised by B. ashtonii. Queens seen from April, workers from June and males from July. 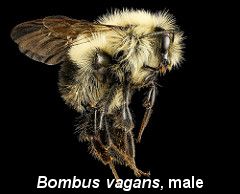 Range: Alaska and Northwest territories, south to Colorado (high elevations only) in tundra, taiga and boreal forests. Nests above and below ground. Hair is long. Body lengths in mm, queen 17 -19, worker 8 - 11, male 10 - 15. A rare species in the U. S. Favourite plants include; thistles, geranium, bluebells, dandelion, goldenrod, willow catkins and clovers in the east and fireweed, lupins, geraniums, snowberry and clovers in the west. Short - medium tongue length. Queens are seen from April, workers from July and males from May.