Range: Yukon east to Nova Scotia, New York, Pennsylvania south to Georgia, Michigan, Kansas, Montana, British Columbia. In and around temperate and boreal forests and wetlands. Favourite flowers include; milkweeds, currants, goldenrod, rhododendron. Usually nests underground. A common species in the east, but rare in the west.
Short - medium tongue length. Hair short and even. Body lengths in mm, queen 17 - 19, worker 9 - 13, male 10 - 14. Queens are seen from April, workers from May and males from July. 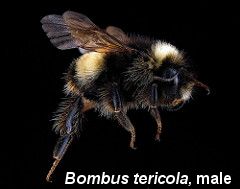 **
Range: Nova Scotia to Florida, West to British Columbia, Montana, South Dakota. Found in temperate and boreal forests, and slightly higher in the Appalachians, into the tundra and taiga of Canada and western U. S. Usually found close to woodland and wetland. Favourite flowers include; willows, roses, honeysuckle, goldenrod, currants and asters. Nests underground. Queens seen from April, workers and males from May in the east and June in the west.
Note: Once common, but its range has declined dramatically since 1990 and is considered rare in the west. Body length in mm, queen 19 - 21, worker 10 - 15, male 13 - 15. Hair is short and even. Short tongued. Is a nectar robber. Parasitised by B. ashtonii. 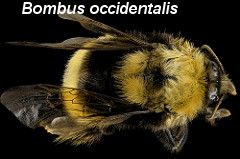 Range: British Columbia south to California, Nevada, Mexico. Common. Favourite flowers include lupins, thistles, buckwheat, Phacelia, Clarkia. This bumblebee has a medium tongue length. Hair is medium length and even. Body lengths - queen 18 - 20 mm, worker 8 - 17 mm, male 10 - 15 mm. Queens seen from February, but main emergence is in May/June, workers from April, but mainly from mid May, and males from June, but mainly in August.

Range: British Columbia, Alberta south to California, Arizona, New Mexico, Mexico.
This species is uncommon. Its favourite flowers include thistles, clovers, Penstemon, desert mint, milk vetch, asters, lupins, phlox delphinium and wild lantana. It has a long tongue, and its hair is short and even. Queens and workers are seen from mid April and males from June. Workers and queens 11 - 21 mm, males 13 - 16 mm body length. Nests on, under and above ground.