Symbiosis. Bumblebee Symbionts means living together, and there are three kinds of symbiotic relationships between species:

Wax moth, Aphomia sociella (see below). In northern Europe the wax moth is regarded as the most serious enemy of the bumblebee, and is found only in bumblebee nests. In some areas in southern England as many as 80% of nests can be destroyed. It is more commonly found in the above ground nests. 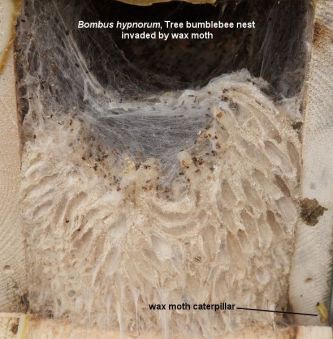 The photograph above shows a Bombus hypnorum nest that has been completely destroyed by wax moths.

The adult moth flies from June - August at night. The female enters the bumblebee nest and lays her eggs. At first the caterpillars feed on nest debris, but as they grow they switch to feeding on the wax food cells, food stores and even larvae. Normally this destroys the nest. The fully grown caterpillar leaves the nest to overwinter as a pupa in a sheltered spot, It spins a strong, brown cocoon in autumn.

In the UK bumblebee boxes have become popular in recent years. If your box is invaded by the wax moth than I'm afraid there is little you can do for the nest as by the time you have discovered it it is too late. All you can do is clear out the nest contents and get it ready for the next year.

Ephestia kuehniella, a flour moth (see below), has a world wide distribution has been reported in North America as invading bumblebee nests. (Davidson, A. (1894). On the parasites of wild bees in California. Ent. News. 5: 170-172. 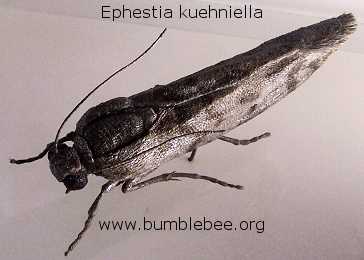 Conopid flies. The female fly waits on flowers till a bumblebee comes to feed, then she jumps on the bee and quickly pierces the bee's body laying her egg inside. The egg hatches inside the bee and feeds off its abdominal contents till it more or less fills the entire abdomen. The bumblebee dies after about 10 days and the fly larva pupates inside the husk of the dead bumblebee body emerging as an adult fly next summer. This parasite can change the behaviour of the bumblebee. Infected workers tend to stay outside the nest more than other workers, often remaining out all night, and they tend to favour colder microclimates, also before the bumblebee dies it attempts to bury itself. In Europe bumblebee queens are not usually parasitised as they emerge before the adult fly emerges. In the U. K. Conopids are usually active from June - August. 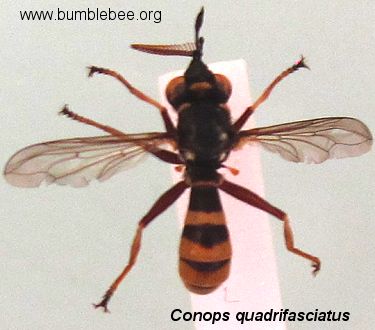 Mites. Locustacarus buchneri lives in the air sacs of the bee where it feeds on the haemolymph. It will not kill a colony, but it will weaken one. The mites hibernate inside new queens.

Varroa sp. which has led to the destruction worldwide of numerous honeybee hives does not affect bumblebees. However there are some species of mites that live in bumblebee trachea and air sacs and others that live off their blood.

Parasitic wasps. These small wasps lay numbers of eggs inside the adult bumblebee and the wasp larvae eat the bumblebee from the inside.

This parasite is only found in queens and affects their behaviour. The bumblebee queen is infected by an adult female worm while she hibernates. It is believed that the nematode enters through her mouthparts. Around 12% of queens are infected, and this can rise to as much as 50% for late emerging queens. In the spring when the queen emerges from hibernation the worm begins to grow, then it turns its whole reproductive system inside out. The uterus grows and grows till it is between 1-2 centimetres long, while the rest of the worm is only a thin thing of a few millimetres. In a normal queen a hormone would be released and her ovaries would start to develop stimulating her to start building a nest, but somehow this does not happen in an infected queen. Meanwhile the worm releases up to 100,000 eggs into the blood of the queen, these eggs hatch and develop, moving into the gut and reproductive system. During this time the queen feeds only for herself, she makes no attempt to find a nest site, and her ovaries do not develop. Often she returns to her hibernation site, here the worm larvae are discharged with faeces into the soil. The mature worms mate, and wait for another queen to use the site to hibernate.

Ants. Various species will invade bumblebee nests if they find them and eat stores, eggs and grubs, this often destroys the colony.

Certain hoverflies, e.g. Volucella bombylans. The adult female fly enters the bumblebee nest and lays her eggs. The fly eggs hatch and the larvae feed on nest debris, doing no apparent harm. The fly overwinters as a pupa in the empty bumblebee nest. This hoverfly is also a bumblebee mimic, and it even buzzes if handled.

Certain mites, e.g. Parasitus fucorum. These mites are often seen attached to the thorax of bumblebees, whom they use as transport between nests. This can be seen below in the photograph sent in by AsB. They scavenge on nest debris, then attach themselves to young queens and hibernate with them. These mites often have even smaller mites living on them! 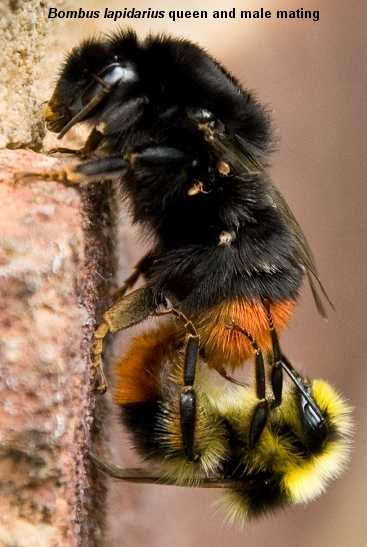 Certain beetles, e.g. Antherophagus spp. These feed on nest debris and use adult bumblebees for dispersal.

Flowers which require pollen by an insect vector. It is believed that many species of flower co-evolved with insects and became so specialised that they need each other to survive. A good example of this is the monkshood flower which, in the UK, can be successfully pollinated only by a bumblebee.

Humans. Though we may also be the bumblebee's greatest enemy with our habitat destruction, introduction of non-native competitive honey bee, and use of highly toxic pesticides there is an increasing number of gardeners who don't use insecticide. So we get our flowers pollinated, the bumblebees get food in a safe environment. And those who raise crops in glasshouses would be unable to do so without commercially reared bumblebees. For more about what bumblebees do for humans see the economic importance page.