Warming up the flight muscles

At rest a bumblebee's body temperature will fall to that of its surroundings. To raise the temperature of the flight muscles high enough to enable flight the bumblebee shivers, rather the same a we do when we are cold.

This shivering can easily be seen in a grounded bee as her abdomen will pump to ventilate the flight muscles. The rate of pumping can give an indication of the temperature of the bee. Ranging from around 1 pump per second when she is at 10oC, to 6 pumps per second when she reaches 35oC. The time taken to raise the thorax temperature has been studied and is laid out in the table below.

Below is a photograph of a Bombus pratorum worker resting on bare ground. It was a cloudy/sunny day with a cold wind. She had been foraging on nearby flowers. The ground she is resting on faced south and was warmed up by the sun when it shone, so her flattened posture would have brought her into contact with this warm soil, and enabled her to use less of her nectar store for her return flight home.

Below are Bombus hortorum workers inside a courgette flower. Bumblebees love courgette flowers and stay in them a long time, especially on cold days as the temperature inside the flower is much higher than that of the outside. Males will even spend the night inside them. 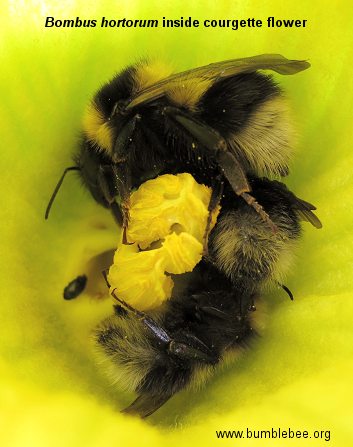 Keeping the nest at the right temperature

Keeping the nest at the right temperature is a very important job. Larvae and eggs must be kept between 30 - 32 oC. To do this the queen and workers "brood" the young. If the nest gets too hot the workers will stand at the entrance and fan out the hot air and in cooler air with their wings.

She will investigate dark corners, mouse holes, garages and sheds. There have even been cases where a queen has gone into a pocket. She will hover and fly low over the ground oblivious to everything, and is quite easy to follow at this time.

Bumblebee queens appear to maintain dominance purely by aggressive behaviour, though it is believed that a dominant queen secretes a pheromone that suppresses the glands in workers that would otherwise lead to their ovaries developing.

In many species the queen is bigger than the workers, she uses her size to dominate workers by opening her mandibles and head-butting the most dominant worker from time to time. This is usually sufficient until unfertilised eggs are laid, or a worker's ovaries develop.

Although bumblebees produce honey, the quantity produced is not enough to make it worth while domesticating them as has been done with honey bees. Even in the largest nests they is usually just a few teaspoons of honey.