So how do you know if you are upsetting a bumblebee? Well it's quite simple really. If the bee is on a flower or other surface and is feeling threatened it will raise one of its middle legs. This is a sign that you are too close and should back off a bit. 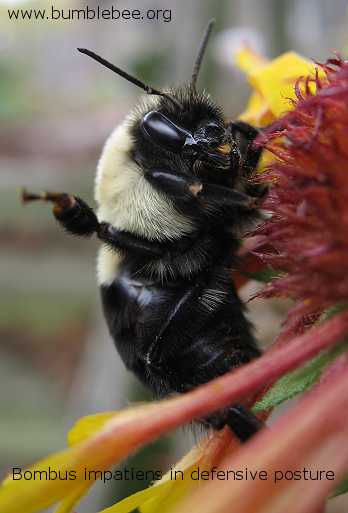 The Bombus impatiens in the photograph above is showing this defensive behaviour. B. impatiens is native to the eastern U. S., but is sold commercially in the western states as a pollinator for glasshouses etc. A visitor to bumblebee.org kindly allowed me to use this image.

In cold weather a bumblebee feeling threatened may fall to the ground to avoid you, as it hasn't built up enough heat to fly off. It is said that bumblebees don't like human breath, so if you want to observe one closely then don't breathe on it.

While marking and measuring bumblebees I noticed that one would sometimes give out a high pitched buzz similar to that when they sonicate to dislodge pollen from tomatoes and other similarly constructed flowers. The bee was trapped at this time with no chance of flying away, so I have always believed that it was angry, perhaps I was holding it down too firmly, or perhaps it was just fed up being handled.

Bumblebees are vegetarian at all stages of their life. The workers gather pollen and nectar for food. Pollen is 16-30% protein, 1-10% fat, 1-7% carbohydrate, and it also contains many vitamins. Nectar is mainly sugar and water with an average sugar content of 40%, but this can vary widely in a flower at different times of day and temperature. Even greater variation is found between different species of flower, e. g. the Crown imperial (Fritillaria imperialis) has extremely watery nectar with a sugar content around 8%, whilst Marjoram (Origanum vulgare) can have a sugar content as high as 76%. Nectar also contains tiny amounts of amino acids, proteins, organic acids, phosphates, vitamins and enzymes. Most of the pollen is fed to the larvae. The workers and males eat very little pollen - they live on nectar that has been turned to honey. The queen eats pollen to give her protein for egg formation, and larvae that will be raised as queens and new queens eat the rest.

A bumblebee worker is capable of carrying half her body weight in nectar carried back to the nest in her honeystomach or crop, and if she is not gathering pollen as well this load can be increased to as much as 90% of her body weight. This takes up most of her abdominal space and is why some bumblebees are predated on for this sweet load. Pollen is carried back to the nest in pollen baskets on the 2 hind legs. When both baskets are full they can weight about 50% of the worker's body weight.

So bumblebees get all their food from flowers. Most species of bumblebee show a preference for violet or blue flowers, but will forage from other colours once they have learned how to.