How you can help bumblebees

On this page you can find out how you can help bumblebees in your garden, or even if all you have is a window box.
Bumblebees need three things:
1. A continuous succession of flowers supplying nectar and pollen throughout the season
2. A warm, sheltered, usually south facing, place to nest
3. A secure place for the queens to hibernate
You can also:
Supplement nectar during the early, cold days
Help grounded bumblebee
Give up insecticide sprays

What bumblebees need to do:

One area or garden may do for all of these things, but it will be different parts and features of that area that will be used for each activity.

Bumblebees drink nectar and eat pollen - nothing else, so flowers are needed for feeding. Pollen is fed to the grubs and is highly nutritious containing between 2 - 60% protein. It has been estimated that a full honeystomach will give a bumblebee about 40 minutes of flying time. Without the energy in nectar a bumblebee cannot fly. If a bumblebee cannot fly it cannot reach flowers to get nectar - it will die. See the grounded bee section below on how to help grounded bumblebees.

Click here to be taken to an extensive list of flowers visited by north American bees and European bumblebees. The most important thing to understand in planting flowers for bumblebees is that they need flowers throughout the season. Unlike honey bees they do not have a large store of honey in their nests, but just enough to last a few days. I have split the flowers into early, summer and late flowers, but this will vary according to where you live. 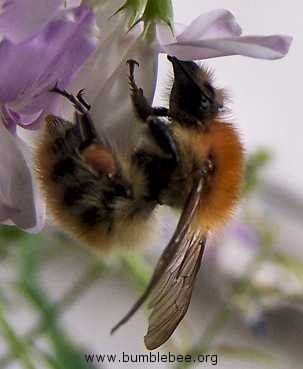 You can feed bumblebees and many other insects even if all you have is a windowbox. When I lived in the centre of Paris all I had was a couple of north-facing window boxes. However from spring onwards I had bumblebees, hoverflies and moths. The images above and below were taken of bumblebees on my windowbox. 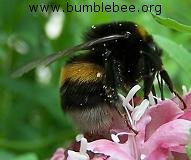 Supplement nectar during the early days.

You can supplement the supply of nectar during the first few weeks of queen emergence by putting out a mixture of 30% sugar and 70% water, the proportions do not have to be exact. This need only be done if there has been a frost or strong wind that has damaged the flowers. Put a small amount of the mixture onto a small container, e.g. the top of a lemonade bottle or the cap of a pen and put this amongst the flowers. This works very well in a patch of heather, and will be appreciated by the queens. During cold days you may find what appears to be an injured queen, that is a bee that is not dead but doesn't fly away. She has probably got too cold and does not have enough energy to build up heat. If you take the bee indoors and provide the sugar and water mixture the bee will soon recover and be on her way, though it is best to keep her inside if it is snowing or raining outside. However if she has pollen in her pollen baskets do let her go as soon as she can fly as she will have already started a nest and may have eggs to brood.

Do not spray insecticide.

Insecticide is indiscriminate and kills all insects as well as spiders and many other useful invertebrates, don't use it if you can help it. Never kill ladybirds or lacewings as they are aphid eating machines. Most gardeners know what the adults of these insects look like, but it is the larva that eat the most. They are not as pretty as the adults, but they have only one purpose in life, and that is to eat as many aphids as they can. If you really feel that you must spray then do so when it is almost dark so you will kill as few bees as possible, and use an insecticide that is specific to the pest, e.g. one that kills aphids only.

If you are a bird lover you may wish to forgo spraying for two very simple reasons.

What to do if you find a bumblebee that cannot fly?

The bumblebee is either sick, too old or too cold to fly. If it is sick or infected with a parasite then I'm afraid there is not much that can be done. However if you find a grounded bumblebee early in the year, just at the start of the first warmer days, then it is probably a queen. She may have been caught out in a sudden shower or a cold spell. If the temperature of the thorax falls below 30 oC the bumblebee cannot take off (see temperature regulation). The best thing you can do it pick her up using a piece of paper or card, put her somewhere warmer, and feed her. When she has warmed and fed she will most likely fly off. You can feed her using a 50/50 mixture of sugar and water in a pipette or eye dropper, or just a drop of this on a suitable surface within her reach, but be careful not to wet her hair or get her sticky. By saving a queen you may have saved an entire nest. If the weather is really unsuitable for letting her go, or if it is getting dark, you can keep her for a day or so if you are willing to feed her.

A grounded bee found at the height or end of summer is another matter. Look at the wings. If they are ragged round the edges (see the photographs of wings) then you have either an old queen or an old worker. There is little you can do as really it is their time to die, however you could take them in and feed them if you wish, but let them go if they start to fly. If the wings are fairly intact then you have probably got a male that is either cold or has been so busy patrolling that he forgot to drink. As above you can take him somewhere warm and feed him, then let him go.

Bumblebees nests have their own page.

Generally these are not south facing as they would warm up too quickly in the spring causing the queen to emerge before there were sufficient flowers in bloom supplying nectar and pollen. So hibernation sites tend to be in cooler places. Under tree roots and at the base of walls and hedges seem to be the most popular places. The main thing is dryness, so damp areas are out. Also the substrate must be loose enough for the queen to dig into.