The oligochaeta are mainly terrestrial or freshwater animals. There are over 3,100 species worldwide and 26 native species in Great Britain. Strangely, there are no native earthworms in the upper part of North America as they all went extinct in the last ice age. All the earthworms found in this region are introduced, and are thought to be having an adverse effect on forests by eating small seeds.

Earthworms range in length from less than 1 mm long to 4 m long, and 2 cm in diameter in the case of the giant Gippsland earthworm.

Chaetae, hairs, bristles. As their scientific name suggests Oligochaetes have fewer chaetae Bristly hairs) than Polychaetes; usually they have four pairs of chaetae on each segment. The chaetae are used in burrowing as they provide anchor points (see the drawings above and below).

Many people find it hard to believe that they have hairs or chaetae, but it is the chaetae anchoring it in its burrow that makes it so hard for birds to pull an earthworm up.

If you put an earthworm on a piece of paper you can hear the scratches of the chaetae as the worm moves. Do remember to handle the worm gently and put it back where you found it after it has entertained and educated you.

The clitellum is an unsegmented saddle-like organ towards the head end of the earthworm's body, and is involved in mating and reproduction (see below). Only mature worms have a clitellum, so if an earthworm does not have a clitellum it is a juvenile, as you can see in the photograph of a Lumbricus terrestris above.

Respiration, breathing. Oligochaetes have no respiratory organs. Gas exchange (breathing) takes place over the entire surface of the body. So if the worm's skin becomes dry it starts to suffocate.

As in polychaetes each segment has muscles, chaetae, excretory organs and nerve branches. Mature Oligochaetes have a clitellum which is always located closer to the head end; this is an unsegmented band or saddle located about a third of the way back from the head, and can be seen in the drawing and photograph above.

The closed circulatory system is a network of blood vessels with oxygen-carrying haemoglobin. In each segment there is a pair of vessels linking the dorsal and ventral vessel that run along the entire length of the body.

The five pairs of vessels around the oesophagus function as hearts to pump blood through the system. In each segment there is a pair of metanephridia leading to pores through which metabolic wastes are discharged.

The skin has many tiny blood vessels to gather oxygen across the moist film covering it.

Below is a diagram of the nervous system of Lumbricus terrestris. 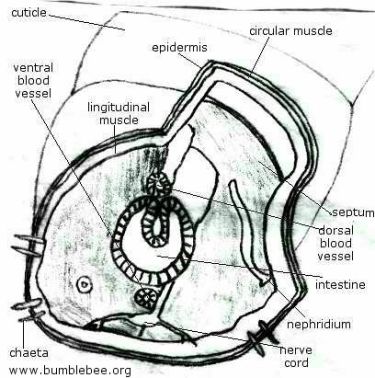 To dissect an earthworm pin it with the dorsal side facing up and cut from the head to the clitellum.

Most oligochaetes have no eyes, but there are a few aquatic species that have simple eyes. However ologochaetes do have photoreceptor cells in their skin, so they can sense changes in light levels.

Most are negatively phototactic to bright light. This means that they will automatically move away from any bright light source.

Most earthworms are scavengers, feeding on dead organic matter, especially vegetation, and along with their food they swallow large quantities of soil. The worm digestive tract, ventral nerve and longitudinal blood vessels penetrate the septa (see below and above). The digestive tract, from the mouth end, has a series of specialised regions. 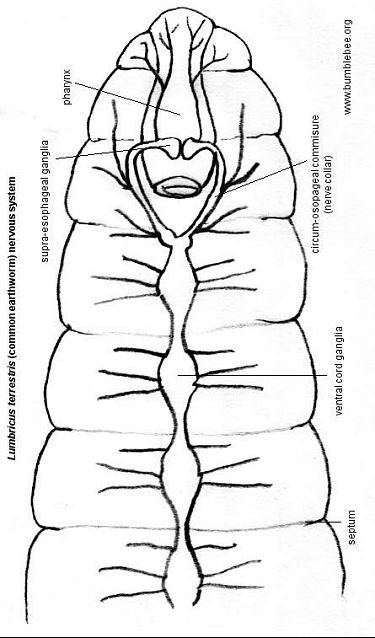 Mating (see the drawing below) usually takes place at night in late summer, but they will mate in spring and autumn if conditions are favourable.

The mature worm emerges from its burrow and when it encounters another worm of the same species and reproductive state they lie side-by-side, head to head. The head ends become enveloped in a mucous tube which holds them together and enables sperm exchange.

Most earthworms hermaphrodite, and during copulation each worm will pass spermatheca to the other's clitellum which secretes the mucous holding both worms together. Mating can last for four hours. 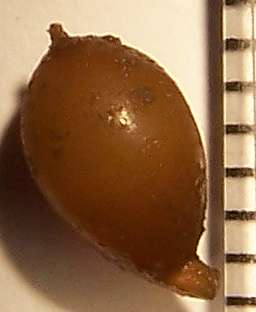 As it passes off the head the ends seal, see the earthworm cocoons above and below. 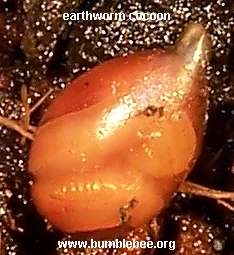 In terrestrial species the cocoon is left in the soil, and often resembles a large brown/beige seed. See above which shows the same cocoon, with the lowest photographed at a later date to that on the top, the scale on the left is in mm.

Above is a series of drawings which from left to right showing the gradual movement forward of an earthworm.

The muscles in the body wall do not have anything firm to attach to. However as the body is fluid-filled and has a limited volume the muscles can deform either the whole body, or segments of the body by contracting the circular and longitudinal muscles alternately.

In the earthworm each segment is an independent compartment. That is why it is still able to move off even when cut in half.

The photograph above was taken early one morning while I was walking over the golf course. It had rained and drizzled for most of the previous day, now in the morning we had a light frost. At first I thought the white stuff was snail trails, but when I had a closer look I could see they were tunnels, some collapsed, but most still hollow and the walls were ice crystals held together by mucous. There were hundreds of them all over the short grass. Unfortunately at the end of some was a small frozen worm that hadn't managed to get underground quickly enough. There were no frozen large worms, and there were no ice tunnels in the longer grass.