There are no medusal stages in the Anthozoa class which contains the corals, sea pens, sea fans and the sea anemones. There are around 6,500 recorded species worldwide, and most can be found in soft sediments. The size range for individuals is 1 mm - 10 m, though many seem much larger because they live in communities.

Anemones (see above) range considerably in size, with the largest being about ten centimetres in diameter and about twenty centimetres long. They attach to the substratum by a pedal disc. They get their common name because of the flower-like appearance of the expanded oral disc. Although they are found worldwide they are more abundant in warmer waters. In the U. K. there are over 40 different species, usually found attached to rocks or weeds.

Some form mutualistic relationships with other animals, e.g. the hermit crab, where they are attached to the shell of the crab, but most live as solitary polyps. 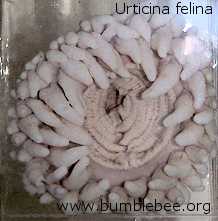 Urticina felicina, the dahlia anemone, above, is found in waters below 22 oC, on the lower shore areas with strong wave action, although it can be found as deep as 200 m. Its tentacles are short and stubby, and usually arranged in multiples of 10. A fully mature species can have up to 160. With its tentacles it catches shrimps, small fish, crabs, mussels, in fact anything it can. It can be up to 15 cm in diameter at the base, and 20 cm across the tentacles. Its colour is variable. It can form dense carpets.

The sea anemone Stichodactyla helianthus, found in shallow Caribbean waters, has a compound in its toxin that is being trialled as a treatment for multiple sclerosis.

Sea fans, also sometimes known as sea whips, grow so that their flat surface faces the current, see Melitodes virgata, below. Their tentacles strain food particles out of the passing water. Some sea fans in colder waters can have colonies as high as 5 m, and look like underwater forests.

Gorgona sp., below, is most commonly found in warm, shallow waters.

Gorgonia flabellum, above, is found in shallow West Indian waters, usually in areas that have strong wave action. It can grow to over 1.5 metres in height and width.

Sea pens get their name because they look like old-fashioned quill pens, see Pennatula phosphorea above . It is found in the NE Atlantic and the Mediterranean, usually in waters more than 10 m deep, and is usually in colonies. It grows up to 25 cm long and as its name suggests it can luminesce when disturbed.