Many living corals look like miniature anemones. Instead of a pedal disc corals secrete a calcareous cup. These cups remain after death, and form coral reefs along with calcium carbonate precipitated from the symbiotic photosynthesising algae called zooxanthellae. The algae live inside the coral and can provide up to 90% of the coral's energy needs.

Fertilization is by mass release of sperm and eggs into the water. This occurs usually at night, a few days after a full moon. Billions of eggs float to the surface where they are fertilized by clouds of sperm. Most of these eggs will be eaten by fish, but not all.

Coral bleaching occurs when the corals are stressed because of water temperature changes, pollution, etc., and they expel the algae. If the coral is recolonised by the algae fairly soon after the expulsion then the coral will recover, but if too much time passes the coral itself will die.

Deep sea trawling is the greatest threat to cold water corals. In a 2 week trawling trip the average trawler sweeps over 33 km2 of sea bed.

There are 3 main types of coral reef:

Brain coral, Platygyra sp, below, is found off the Queensland coast, Australia. It is a nocturnal carnivore which eats shrimps and plankton. It is a popular addition to many aquariums. 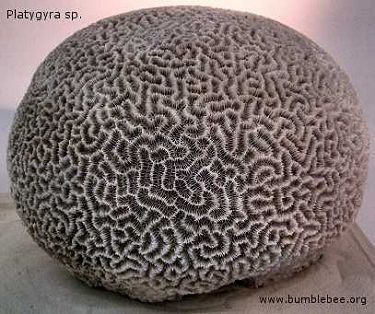 Pocilliopora sp., below is commonly known as the Cauliflower coral. It is found in the Pacific and Indian Oceans.

Below is Turbinaria sp., a Cup Coral found in Australian waters. The colour varies, and includes greens, yellows and light brown.

Favia sp. below, is a reef-building stony coral which is usually dome or flat-shaped. This one comes from Ellice Island in the Pacific.

Duncanopsammia axifuga, below, is commonly known as Duncan coral or whisker coral. It is found below 20 metres on sandy and rocky sea beds near the bottom of reefs around Australia, and in the South China Seas, and is a large polyp stony coral. Individual occupy the cup-shapes, and the polyps are round, flat with long tentacles that have rows of nematocysts (stinging cells). Each polyp resembles an anemone.

Recently it has become a popular item in the aquarium trade as it is easy to rear, and many are reared in captivity now.