The queens (see the photograph below) can only be seen in summer after mating. They are about 8 - 10 mm long and look very much like the workers. The workers range from 3 - 7 mm long. The photograph below shows a Lasius niger male, and below that a queen ant with her wings still attached. As you can see the wings are longer than her body (the blue grid is in 0.5 cm squares), and smoky. The queen and male looks similar, but the queen is bigger, and the abdomen of the male is thinner.

The queen will break off her wings and find a place to dig a small chamber where she will lay her eggs. She will spend the rest of her life laying eggs and will not emerge into the daylight again. She can live for around ten years, but of course most queens die before they even reach the egg laying stage. I found this queen after we had had a few wet days, and the ground was soft for digging, but not saturated. In the U. K. July and August are the most common months for males and queens to emerge, and around 6 pm is the best time.

The photograph below shows sexuals (males and queens with wings) leaving their nest.

Below you can see some workers and a lot of pupae. This was taken at a time when males and new queens were almost ready to emerge. In the photograph you can see a few cocoons that are larger than the others, these will contain queens or males, the smaller cocoons contain workers.

Lasius niger tend to nest under stones and paving slabs, and do occasionally stray into our homes if we leave food around.

As pets they are fairly easy to keep and will eat almost anything.

Lasius niger also feeds on aphid honeydew. To receive a droplet of honeydew the ant strokes the aphid's abdomen (see below). The ant will also remove ladybird eggs and larvae (a major aphid predator) from the plant the aphids are feeding on. So you could say that the ants are farmers and the aphids are their stock. They were doing this millions of years before humans walked the earth.

Above is an adult worker wood ant, Formica rufa. This species does not have a sting, but can squirt formic acid out of its rear end, just below the anus. To do this it bends its gaster forwards between its legs. The accuracy is good up to a few centimetres only, but it can squirt up to 100 cm. This ant has very good eyesight.

It is commonly found in coniferous woodland. The nest is often built against an old tree stump, and the above ground part of the nest is mainly pine needles. The nest can extend more than a metre underground. Each nest can contain 500,000 ants. The most common months for mating flights are May and June.

Wood ants will eat almost anything, e. g. nectar, honeydew, seeds that have an elaiosome (rich, oily food body attached to the seed to aid dispersal by ants), insects, etc. Many woodland plants have elaiosomes, e. g. anemones, violets, primroses, and wood ants spread their seeds allowing the plant to colonise new areas. It has been estimated that ants from an average nest will transport around 36,000 seeds in one summer.

In captivity a Formica rufa queen reached 15 year of age before dying, and may live even longer in the wild.

Wood ants are considered a "keystone" species in woods and forests for the following reasons:

1. They influence the abundance and distribution of many other species in the wood, and this includes underground and canopy dwelling invertebrates as well as those on the ground.

2. Ants are involved in the dispersal of the seeds of many plants - especially the woodland species which cannot rely on wind as much as those in the open.

3. Ants prey on many herbivorous invertebrates, and so can lead to healthier vegetation.

4. Ant nest construction aids in the recycling of nutrients.

5. Ant nests are home to many (non-ant) species that cannot, or have difficulty, surviving outside of an ant nest.

6. The ants themselves are an important food source for many woodland birds. 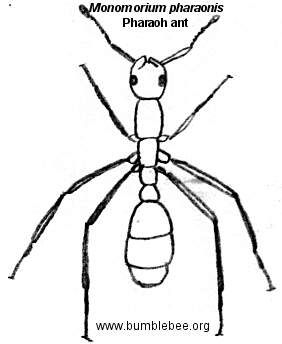 Above is the Pharaoh ant, Monomorium pharaonis. It was introduced to the UK over 100 years ago from the tropics. It is a small ant, the workers are 2.0 mm long, queens 3.6 mm long, and males 3.0 mm long. It is light yellow in colour.

There are usually many queens in one nest, and many of the nests are linked to each other and exist quite happily together.

Sexuals are produced throughout the year. Around 300 eggs are laid by the queen in batches of up to 12 at first, but later as few as 4.

The eggs hatch in around a week. The larvae take around 18 days to reach full growth. Pupation takes around 9 days, and adult life span is usually 5 - 6 weeks.

Mating takes place within buildings, in crevices and cracks. In the UK it is found only in heated buildings, as it requires a temperature above 5oC to survive. The nests are usually in difficult to locate places and as they are linked to other nests eradication is difficult.

This little ant doesn't cause any structural damage to buildings. It cannot bite or sting humans, and, so far, it hasn't been found to spread disease. It does love our large, climate controlled buildings such as hospitals, nuclear power plants, and shopping malls, etc. But it is a little disconcerting for the people who work in these places to find a tiny ant strolling over dressing, sauntering around the edge of a control button, or scaling the heights of a tower of neatly folded white sportswear.