There are around 1100 species of Solifugae world wide. They are solitary and found in tropical and semi-tropical regions, usually in hot or warm arid environments. The Latin name is derived from solis = sun and fuge = avoidance.

They are nocturnal or crepuscular, and tend to hide under stones or in crevices during the day. Although there are some species that are active during the day - hence one of the common names of "Sun spider". Some species construct burrows. They are very fast runners, and are highly aggressive. They are sometimes called "the great white shark of the arachnids. Solifuge range in size from 80 - 150 mm long. They have 1 pair of functional eyes as well as an additional pair of vestigial eyes which may be able to detect light intensity in some species. Their chelicerae - each formed of 2 pieces are huge -see above and below. Their pedipalps look like legs, but end in an adhesive organ which aids in prey capture. The first pair of legs is relatively short and not used in running, but more as "feelers".

As with many arachnids the males usually have a smaller body than the females, and have longer legs.

They will eat anything they can catch, but feed mainly on grasshoppers and crickets, earthworms, snakes, small lizards and rodents. The food is sucked up as a liquid after being mashed up by the chelicerae and mouth. They will eat and eat until their abdomen is so distended that they can hardly move.

They do not have venom, at least not the species studied so far, although their bite can be very nasty, and often gets infected by the bacteria found on their chelicerae. Their chelicerae are easily strong enough to draw blood from a human.

Galeodes arabs, above, is found in North Africa, the Middle East and Kazakhstan, and is one of the largest species. Its main prey item is flies which it stalks.

Palpigradi are all less than 3 mm long. They live beneath stones, in the soil and in caves worldwide, but mainly in tropical and sub-tropical regions, and always where there is high humidity. There are 82 species worldwide that have been described so far, and they range in size from 0.65 - 2.8 mm.

Their exoskeleton is thin and pale-coloured or colourless. The pedipalps are used in walking, but the first pair of legs are used as "feelers", and are held off the ground when walking (see Koenenia sp. above). They have no eyes. The flagellum is multi-segmented with long setae. It has 14 or 15 segments , each segment with 6 - 8 setae.

The females lay relatively large eggs, and only 1 - 4 are laid at a time.

Whip spiders have flat bodies and spiny, raptorial palps (see above). The first pair of legs is very long. They are similar to Uropygi (see below), but without a tail, and because of this they are sometimes called the Tail-less whip scorpion.

The body length ranges from 5 - 45 mm, and there are around 140 species worldwide. They have 8 eyes, a pair at the front of the carapace, and a group of 3 on either side, although species that live in caves may be eyeless. Legs span can be as much as 50 cm. They do not have venom glands.

Their main prey items are arthropods, small lizards, and frogs.

Captive species have lived as long as 10 years.

They are found in the tropics and sub-tropics, with just a few species in temperate areas.

Heterophrynus elaphus, above, is nocturnal. Its front legs are modified to serve rather like antennae, and are strongly sensitive to touch and chemicals.

Some authorities join this order to the Uropygi, and there are many similarities. There are 258 species described worldwide. They are found in the tropics, and sub-tropics, usually in humid locations.

Most are less than 5 mm long, though some reach 10 mm. Most species have no eyes, though many have eye spots which may detect light. A few species do have a single pair of eyes. The palps are long, leg-like and used in prey capture, and have 6 segments. As in the Uropigids and Amblypigids the first pair of legs is long and used like antennae. As their common name suggests the flagellum or tail is short, with around 3 - 6 segments in adults, although the male flagellum is unsegmented, and can be a very different shape to the female's. The male flagellum is clasped during courtship by the female, so a bulbous or spatulate shape is easier to keep a hold of than a thin tail.

Their prey is generally insects and worms. They can survive long periods without food - 5 months has been recorded in captivity.

There are around 108 species of Uropygi, whip scorpions world wide. They are found in tropical and semi-tropical regions. Most prefer humid environments, but a few inhabit deserts. They are sometimes termed "living fossils" as their body plan has not changed for 300 million years.

They range in size from 2 - 8 cm long. They have between 8 and 12 eyes arranged in 3 groups. Usually 2 face the front, then there are 2 side facing groups of 3 - 5 each. They do not have venom glands.

The pedipalps (see the drawing below) are large, heavy and often end in pincers used in grabbing prey, which is usually cockroaches and crickets. The first pair of legs is long, and not used for walking, but for sensing and touching the surroundings, and are covered in hairs. The flagellum or tail has many segments covered in sensory hairs. They have 2 pairs of book lungs similar to spider book lungs.

Their prey is mainly insects, but they will also take frogs, toads, slugs and worms, and can live for up to 4 months without food. Their main predators are ants, solfugids, birds, reptiles and small mammals.

Most are nocturnal and hide in leaves, rocks, logs, etc. during the day. Usually they are slow movers, walking on three pairs of legs with the first pair of legs and the pedipalps held outwards in the direction of travel.

Some species have a courtship dance similar to scorpions, during which a spermatophore is passed to the female.

They dig burrows to shelter in, and the size of the burrow can be 2 cm in diameter and 15 cm long.

The female hides in a crevice or burrows and lays her eggs which can number 7 - 35 in a brood chamber. The eggs are relatively large. She attaches them to her body and remains hidden with them until the young have hatched and moulted. Then the female dies and her young disperse. It can take up to 4 years for some species to reach maturity, and they can live for 4 years after that. 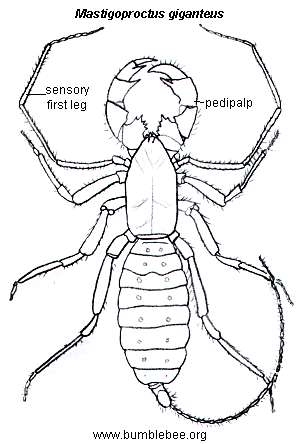 Mastigoproctus giganteus, above, is found in the southern U. S. in a band stretching from coast to coast. It can reach 65 mm in length. During courtship the spermatophore is passed directly into the genital opening of the female by the male using his chelicerae.