There are over 50,000 species of spider in 109 families that have been described so far, and around 670 species in 37 families in the U. K. If the total number of spiders on the Earth were spread evenly across the land each square metre would have about 130 spiders on it. It is believed that without spiders humans would probably starve, as spiders eat so many of the insects that would otherwise eat or spoil our crops. Spiders range in size from 0.4 - 300 mm in the U. K. The largest in the world are the tarantulas, which can have a body length of up to 12 cm, and a leg span of 28 cm. The fossil record stretches back over 300 million years. Megarachne was fossilized around 300 million years ago in what is now Argentina, had a body length of 33 cm and a leg span of 50 cm! Spiders are found in almost every habitat. All spiders are predators. They are divided into over 100 different families - we cover just a few here.

The spider body is in two main parts. The hard prosoma (cephalothorax) which contains the brain, legs, palps, chelicerae (fangs), and eyes; the soft and expandable opisthosoma (abdomen) which contains the digestive tract, reproductive organs, silk glands, and ends in the spinnerets which usually number 2, 4 or 6; are joined by a pedicel (see above and below which shows the underside of a mature female). The genital opening of both male and female is on the underside of the abdomen, however the male passes his sperm into the female using his palps.

The chelicerae (singular is chelicera) end in fangs which usually have poison glands, (see the diagram above and the photograph of the Tegenaria mature male below).

The fovea is a dark depression behind the head region where internal muscles are attached.

The cardiac mark shows where, just below the cuticle, the heart lies. Sometimes you can see the heart beating through the thin cardiac mark.

Spiders can have six or eight eyes (see above and below) and the arrangement of the eyes is used in identification; however, vision is poor in most species, and used mainly for detecting movement. The wolf and jumping spiders which hunt down their prey usually have better vision. Spider eyes are not compound like those of insects, but simple with a single lens, and usually arranged in two rows. The arrangement of the eyes is often used to identify to family level.

Each mature female has a pair of sperm storage sacs or spermathecae. The spermathecae are shed with each moult, so the female spider must mate after each moult. The epigastric fold (see above) is where the female genital opening, the epigyne, is located. It is a hardened reddish-brown area, and is seen only in mature females. The palps or pedipalps of the males are modified to transfer sperm into the female's epigyne (genital opening) see above, which is located on the dorsal side of the opisthosoma. The palps are sometimes used in identification to species level. The epigyne of the female and swollen palps of the male (see below) are only seen in mature adults (see the photograph below). In females the palps are always simple. Females spiders are usually larger than males.

Most spiders have what are called book lungs (see the drawing below). These are blood-filled slices of tissue separated by an air space. Most species have one pair of lungs. 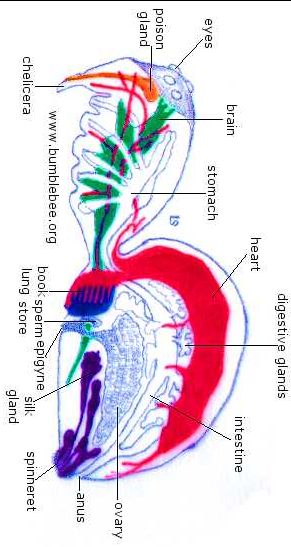 Spider legs are divided into 8 parts - see the drawing above. There may be 2 or more claws, and these may have teeth like a comb. Hunting spiders have a pad of hairs which, along with a sticky secretion, enables the spider to get a good grip on most surfaces.

The femur is the equivalent of our thigh, the patella - our knee cap, the tibia - our shin, and the metatarsus, tarsus and claws our foot and toes.

As a rough guide hunting spiders have 2 claws and web builders have 3.

The earliest fossil evidence of arachnid silk is from 400 million years ago. The silk is produced in the silk glands (see the drawing above) and comes out from the spinnerets - see the drawing above (the number of spinnerets varies according to species, but 3 pairs is the most common) which are located on the underside posterior of the opisthosoma. There are 7 different types of silk gland, each producing a different type of silk, but no single species has all 7 types of gland. The silk is a liquid protein chain of amino acids with glycine and alanine being the main ones. The liquid hardens under tension in contact with the air, it is 5 times as strong as steel weight for weight, and is elastic like rubber. It emerges as many very thin strands (the spinnerets have up to 600 ducts) which join up to form one very strong strand. It is drawn out of the spinnerets by the back legs, or by the weight of the spider's body.

Many spiders (except wolf and jumping) catch their prey in webs. And web construction can be used to identify to family or genus. Webs are the most obvious use of spider silk (more on webs), but spiders use silk for much more:

For each of the above a different kind of silk is produced.

Spiders do not stick to their own webs because they either step on the non-sticky parts only, or secrete a special oil on their feet. Also their leg hairs decrease the surface area available to stick.

Silk is also used by the females to build egg sacs where the young remain for a few weeks.

The silk from Araneus diadematus is around 0.003 mm thick - that is just 10% of the thickness of silkworm silk.

Spider silk from webs is used by many birds (tits, warblers, gold crests) as part of their nesting material. Spider silk, both real and man-made, is also used by humans. The ancient Greeks used it to help heal wounds. Today it is used to repair skin, blood vessels and tendons. It is also used to produce bullet-proof clothing.

Spiders undergo an average of 5 and 10 moults in their lifetime, with the larger species tending to moult more, and can moult up to 20 times. Spiders moult their skins as many as 8 times before reaching adulthood.

The new cuticle is very soft and this means the legs are unable to support the body weight, so small spiders suspend themselves from a silk thread, and large species make a silk mat to lie on and moult on their backs to allow the legs to harden.

During the moulting process they can lose a leg, which will be regrown at the next moult. When the spider's cuticle is stretched to the limit the spider can grow only by moulting. Spiderlings may moult every few days, and increase in size with each moult. The time between moults increases with age. When a spider is about to moult it will stop eating, stay immobile, and some species seal themselves inside a silk-lined chamber while the old, outer layer separates from the new layer. The new cuticle is soft and pale.

The old cuticle or exuvium is often mistaken for a dead spider. The cuticle hardens and takes on normal colouration within a few hours.