The Theridiidae are also known as the comb-footed spiders or tangle-web spiders. There are around 2,200 species worldwide, 76 species in Northern Europe, and 58 British species. Below is a drawing showing the typical head shape and the arrangement of the eight eyes.

Females usually have a round abdomen. Most females are venomous. Males tend to resemble females. They are usually brown, grey or black in colour, and have short and thin legs with a row of comb-like bristles on the hind legs, although this may be missing or reduced in small species.

Their web is irregular, three-dimensional and has sticky threads hanging from it to entrap prey.

Males court females by vibrating strands of her web with his legs or palps. 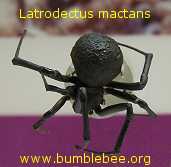 Above is a preserved specimen of and adult female Latrodectus mactans, the black widow, and below is a drawing of a mating pair. It is native to North America, but there are other, very similar, spiders in the Latrodectus genus:

In fact there are 30 species in the world, all similar in shape and appearance. The males, as you can see in the drawing below, are tiny, also they don't bite humans. The females, in contrast, do bite humans. Even more unsettling is their propensity for constructing their webs in outside toilets especially around the seat. With the consequence that the bite is often on the more delicate and rarely uncovered parts of the anatomy. On the good side, if there can be one to this subject, a study in Texas found that the invasive fire ant, Solenopsis invicta, made up 85% of the prey items. Now there is a thing to think about - an outside toilet, dark, black widow spiders and fire ants!

The black widow builds its retreat in dark, sheltered spots, but builds its web for trapping prey between vegetation, and in most other places, even under stones, so usually it is found outside or in unheated buildings. It will only be found in heated buildings during cold spells, or prolonged rain. The adult female (above) is about 8 - 10 mm long with a leg span of 25 - 40 mm, and on the underside of the abdomen she usually has the characteristic red hourglass shape.

The male is just 3 - 4 mm long, and his abdomen is elongated. The male does not bite humans, and he spends most of his life wandering around looking for females to mate with.

Mating, reproduction and behaviour of the black widow spider 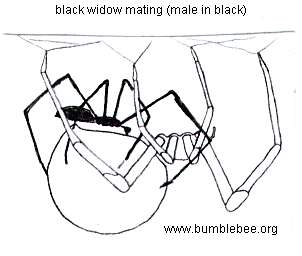 One mating can supply the female with enough sperm to last her a lifetime, and males are often, though not always, eaten after mating - it mainly depends on whether the female is well-fed or not. A male can tell if a female is well fed by touching her web with his feet, as he picks up scents through chemoreceptors in his feet. Given the choice of a hungry female and a well fed one, the male will always choose to mate with the well fed one as it is less likely that she will eat him afterwards. However if there is only a hungry female to mate with, the male is usually so desperate to mate that he will take his chances of escaping afterwards. Courtship can last hours, and consists mainly of the male wandering around the female's web tapping and plucking strands of silk and waving his legs in the air.

The drawing above shows a mating pair with the the male in black. The female lays around 200 - 250 per egg sac, and it is possible for a healthy, well fed female to lay enough eggs to fill four sacs per season, and around fifteen in an average lifetime. The eggs hatch in 20 - 30 days, but cannibalism is rife among the spiderlings, and usually fewer than a dozen survive to meet the outside world.

Females are sexually mature at around 2 - 4 months. The average life span for a female is six months, and for a male, around three months.

The spider is timid and nocturnal. During the daylight it spends its time in the silken tunnel retreat. Generally when a female is on her web she will hang upside down.

The venom is neurotoxic, so it blocks the transmission of nerve impulses which leads to rigidity and cramp. It is said it is 15 times stronger than rattlesnake venom, but because of the small quantity injected it is not usually fatal to healthy humans on the rare occasions they are bitten, providing the bite is treated promptly and correctly.

Only about 0.5% of bites from the black widow to humans prove fatal. Strangely cats are very susceptible to the venom, but dogs are fairly resistant, as are sheep and rabbits. 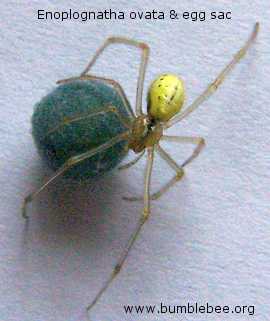 The Common candy-stripe spider is found throughout the U. K. and in Eurasia from Finland to the Caspian Sea. It has also been introduced to the United States and Canada. The spider is most active, and therefore seen, during the summer months. Above is a mature female Enoplognatha ovata with her egg sac in which there are eggs or spiderlings. Mating occurs in summer, and the males die soon afterwards. The female rolls or bends a leaf (see below) and guards her single egg sac. The spiderlings emerge in September, and their mother wanders off to die. The spiderlings overwinter in the leaf litter.

Below is the typical method of hiding her egg sac under a bent leaf which is held in position by silk.

The female body length is 4 - 6 mm and the male is 3 - 5 mm. The colouring can vary with a cream or yellow abdomen with or without 2 red stripes or even one wide red band running down the middle, but they always have the black spots that can be seen in this specimen. They are usually found in low vegetation on roadside verges, gardens and woodland edges. 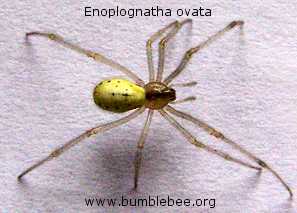 There are 8 species in the Steatoda genus in northern Europe, and 6 in the British Isles. All have a thin white band around the front of the abdomen, but this cannot always be seen from above. Males and females are similar, but the males are smaller. The males can stridulate, and the sound is used during courtship. Females can live for over a year.

The female body length can be up to 7 mm and the male 5 mm (the scale above is in mm). They are common in the corners of houses, outbuildings and also on tree trunks. This one was found on stacked firewood. Females can live for up to 4 years. They are sexually mature in the summer and autumn. Its main prey is flies, but it will take ants and woodlice. The female keeps her egg sac with her on her web. Once hatched from the egg sac the young disperse fairly soon.

This spider has been getting a lot of bad publicity recently. "The number of fatalities is currently hovering near the zero mark." I cannot remember where I saw this, but it is true, and is an indication of how desperate the press get to sensationalise something.

I have had these spiders in my log stack for years and have never been bitten - or if I have, the bite has been so mild as to be un-noticable. The one above came in on a log. During the time I took its photograph I was never bitten, nor did it exhibit what I would consider aggressive behaviour. I returned it to a section of the log pile that was being left for at least a year, so that I would not disturb it again. I suppose it would bite if being harassed or accidentally squashed to death - but then, so would I.