Spiders in the Oonopidae and Pholcidae families

The Oonopidae are hunting spiders. The drawing below shows the typical arrangement of their six eyes as seen looking down from above the spider. Female spiders in this family do not have a sclerotized epigyne.

Although there are only 2 species in this family in the U. K., a few species have been recently introduced with plants, but can survive only in heated environments. Most Oonopids are nocturnal. 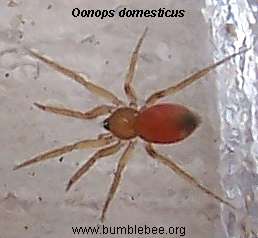 Above is Oonops domesticus, there are only two spiders in this family in the UK, this one which is generally found indoors, and Oonops pulcher which is generally found outside. Both look rather similar being small, between 1-2 mm long. The abdomen ranges from yellow, orange, red or pink, with a tan or brownish prosoma. They have just 6 eyes and no epigyne. Both sexes are similar.

Although they are found widely in the UK and Europe, they are rarely seen because of their small size, and also because they are active at night. They have a characteristic way of moving - they seem to slide slowly over the surface, and then move so speedily that you lose sight of them. They lay just 2 pinkish eggs at a time in a semi-transparent silken sac.

Some spiders in this family have eight eyes, and others have six. Below is a photograph of a mature male Pholcus phalangioides (daddy-long-legs spider) and two drawings showing the shape of the head. There are 969 species in this family world wide, but only 3 in the U. K. Most of the other species live in tropical caves. When they are disturbed they vibrate their tangled web making themselves appear blurred and difficult to catch. These spiders prey on other spiders that stray within reach, they will even tackle and eat the huge Tegenaria sp. The drawing below shows a typical Pholcidae head and the arrangement of the 8 eyes. Males and females are similar, with males being slimmer in the abdomen.

It is easy to see the spider below is a mature male as his palps are swollen so that they look a little like boxing gloves. The palps of the male act as secondary sex organs. The sperm is formed in the testes which are located in the abdomen. The fluid spermatozoa comes out of a very inconspicuous opening onto the web. The male then draws up the fluid into the palp, probably by capillary action. And it is the palp that is inserted into the female's epigyne during mating. It is the male who searches for the female, so it is more common to find wandering mature males than females. Copulation lasts several hours, and usually the male is not eaten afterwards.

There are usually around 20 eggs in the egg sac, which is held by the female in her chelicerae and carried around with her. The eggs are visible as the sac is little more that a few threads.

They have a potent, fast-acting poison enabling them to quickly immobilise prey item much larger than themselves.

Pholcus phalangioides is a very distinctive spider with its long legs. The leg span can be up to 110 mm.This male above was found crawling over the wall in the Loire region of France. In the UK they tend to be found indoors or in cellars as far north as Dundee, although they do not thrive in centrally heated rooms, as the atmosphere is too dry. A fully grown adult has a body length of 8 - 10 mm, and a tubular abdomen. They feed on gnats and other small insects, and will also take spiders. The female below was found in an Edinburgh kitchen. Note that her abdomen is much fatter than the male above.

Mating and reproduction . There is little or no courtship before mating, and the male is not eaten afterwards. The mating can last as long as 3 hours. In the U. K. females are mature year round, but males only in the spring and summer.

The mature female carries her eggs around with her in her jaws until the spiderlings hatch which is usually around 2 - 3 weeks after being laid. She doesn't make an egg sac, and the eggs are held together by just a few strands of silk. She will leave the eggs in her web so free up her chelicerae to capture prey, or even to mate again. The young may swarm over her head and cling to her fangs before dispersing in a week or two.

In the U. K. the first batch of eggs is usually laid in June, and there can be a 2 nd and 3rd batch at monthly intervals.

The web is very open and disorganised looking, and tends to be made high up, or in the corners of rooms. It seems to be constructed more to detect the presence of prey than to restrain prey. Prey items are insects, and even a small gecko, a snail and a harvestman have been reported, however the most common prey item is undoubtedly other spiders.