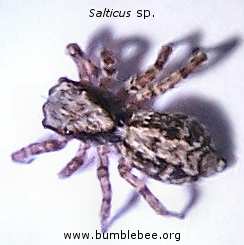 There are 5088 species of jumping spider world wide, 75 in Europe, and 38 in Britain. The Salticidae do not make webs to catch prey, rather they hunt and stalk their prey, then, when it is within reach, they pounce on it injecting it with venom.

The Northern European Salticidae are small and most commonly seen during warm sunny weather. The UK species have black and white, or brown and white stripes, and are active during the day.

Jumping spiders have pads on their feet making it possible for them to cling to smooth surface - even glass.

They have the greatest visual acuity of all arthropods. Their eyes give them binocular vision and they can see in colour and polarized light. The arrangement of eyes is shown below. They have a squared-off front to the head with only the fangs and headlamp-like front eyes sticking out. The pair of small eyes furthest to the back may just detect light and movement. 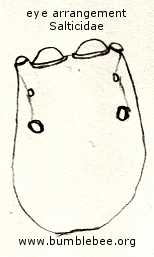 The spider often rears up to get a better look at things, and they can spot prey 20 cm away. The pair of eyes between the 4 at the front and the two at the rear are hardly visible to the naked eye. The two large front-facing eyes are like headlamps (see below) and do reflect the light just like the eyes of a cat. They stalk prey then leap on it. They have a fondness for leafhoppers, and will eat 4 - 8 per day. Good vision is also needed during courtship. 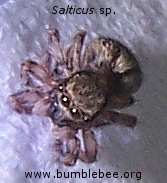 The male jumping spider waves his legs and palps semaphore-style as he dances around the female trying to gauge if she is willing to mate. If she is willing to mate his dancing will have reduced her to such a passive state of ecstasy that he can mate and make a retreat with his life; free to delight another girl with the dance of his life and hers. In some species the males have fringes of hair around their eyes, which, along with the pedipalp signals, they flaunt during courtship displays in front of a female.

Salticus sp. The most common species in the genus is Salticus scenicus (below), commonly called the zebra spider because of its stripes. It is often found on walls, fences and window sills during warm, sunny weather. It's body length is 6 - 7 mm when fully grown. Greenfly are a favourite prey of this genus. It mates from May onwards.

The Salticidae move in a jerky fashion making a short, fast run, then stopping to have a look around, and sometimes raising the cephalothorax to get a better view, then another short, fast run.

The photograph below was taken on a wall in my garden. The movement of the fly attracted my attention, but I didn't see the spider at all at first as it was so well camouflaged. As you can see the fly is much bigger and heavier, but was already tiring. The spider just held on to the fly with its fangs and to the stone with its legs and drag line. It was totally oblivious to me, so I could get close enough to take this.

Toxeus magnus is a jumping spider found in South East Asia. The female makes a safe nest to keep her eggs in. Once the eggs have hatched, she stays in the nest with them, not even emerging to hunt. Remarkably, even though the young and mother do not hunt the young emerge about three weeks later already half the adult size. Chinese researchers noticed that the young cling to their mother's abdomen, which is normal with spiders. What was not normal though, was the creamy fluid oozing from the mother's abdomen. When the researchers analysed this liquid they found it contained four times as much fat as cows milk, and an equal amount of protein. Even after emerging from the nest to hunt the spiderlings will continue to suckle from their mother for another three weeks or so.

Salticus scenicus, above, males are 5 - 6 mm long and females 5 - 7 mm. They are found in sunny spots both indoors and out. They are fairly abundant in England and Wales, but less common in Scotland. This one was found indoors in a sunny, warm room in Edinburgh. Usually you find them hunting for prey on walls and other vertical surfaces. Their dart stop runs make them noticeable, and when they stop they often raise up their cepalothorax to get a better look, then the light is reflected in their two biggest eyes. In duller weather they retreat into a silk-lined cell built into a hole or crevice. I think the one above is a female, and the one below which was found on Upper Deeside is a male.

Zebra spiders court and mate in the usual way, see above, and after mating the female lays 15 - 25 eggs in a sac in her retreat and stays with them. They hatch after around four weeks, and their mother will stay with them until they have completed their first moult, then she goes off on her own leaving them to fend for themselves. The spiderlings will not usually mature until the following spring.