The Araneidae family has 2841 species world wide, and 32 in the U. K. They have broad bodies, with relatively short legs often with spines. Araneidae have 8 eyes, and the typical arrangement of the eyes (looking from above) is shown in the drawing below.

The spiders in this family spin orb webs with a closed hub, as is shown in the drawing and photograph below. They may also build a retreat away from the web. The average U. K. orb web has over 1000 junctions, and uses about 20 m of silk, but weighs under 0.5mg. Yet it can easily support the heaviest spider. Araneus quadratus can reach weights of 2.25 g when heavily laden with eggs. That is 4500 times the weight of the entire web.

When a spider is going to build a web it has to consider certain things. The size and shape must suit both the size of the spider and the prospective prey. There need to be supporting structures that the web will span, and any obstacles in this span must be incorporated. Also the reserves of web-building silk in the glands must be enough to build a functional web. And then there is the weather, in very cool weather some spiders will leave bigger gaps between the spiral threads to build the web more quickly so that the spider can retreat to shelter.

Once the web is built the spider will make alterations, tweaking the tension according to the type of prey expected, adding more sticky silk if a prey item manages to escape,and repairing damage caused by struggling prey items. It is a busy life!

Araneidae mating - when a male approaches the web of a female he is hoping to mate with he plucks the threads of her web to attract her attention, and to let her know he is not her next meal.

Egg sacs. Spiders in this family tend to lay their eggs sacs amongst vegetation or under stones.

There are nine species in the Araneus genus in northern Europe. Above shows the cephalothorax with the typical arrangement of the eyes, chelicerae etc.

The spider above is Araneus diadematus, also known as the garden spider, the cross spider and the diadem spider. She was found in a rose bush growing up a wall, and had been there for some months. They are usually very easy to recognise because of the large white cross on the abdomen. The top of the cross cannot be seen here as she is so big with eggs, but you can see it in the photograph below. They are one of the most common orb web spiders, and is found in Europe, North America and Asia, right across to Japan.

Araneus diadematus builds a large web - a typical one is seen in the drawing near the top of the page, but they can vary slightly according to the anchor points. The average web is around 40 cm in diameter, and 1.5 - 2.5 m off the ground if suitable sites are available. However they will build anywhere. I have one in the roof corner of my greenhouse. The female has changed the web to suit the expansion and then removal of a tomato plant, and it is certainly not the "average" shape and size.

Females hide close to the web. A web can take less that an hour to construct, and will last just a day or two at most as the sticky droplets on the spiral threads get coated with dust and pollen and become ineffective. The spider doesn't waste the silk of the old web, but eats it as it is full of protein. You can just see silk issuing from her spinnerets at the end of her abdomen in the photograph above.

In the U. K. it usually takes two years for this spider to reach sexual maturity. Mating usually takes place in August and September. Mature males do not make webs, but spend their time searching for a mature female to mate with. They are able to tell if a female is mature by detecting a chemical signal on the female's silk. When he finds a suitable female he gently plucks the silk strands of her web to announce his arrival, and to let her know he wants to mate and is not her next meal. Although if he doesn't make a speedy retreat after mating he might be. She will lay her yellow egg sac containing 400 - 800 eggs in a sheltered spot, probably attached to the wall, and stay with the eggs till she dies in the autumn.

The young will emerge as it starts to warm up the following spring. At first the spiderlings will huddle together in what looks like a fuzzy golden ball which if touched seems to explode with spiders running in every direction. Then after their first moult they will go their separate ways. They will moult two or three times before winter hits, and they will reach maturity the following year. However in warmer places it is possible for them to reach maturity in their first year.

It takes just 5 seconds from the time a prey item lands on the web until it is bitten and the spider starts wrapping it up in silk. Often the spider will completely wrap up the prey in silk before killing it. Sometimes she does not kill the prey immediately. She will twirl it round and round in silk until all its legs are caught up, then she leaves it hanging until she is ready for a meal. Below a female is wrapping up a rather large fly. 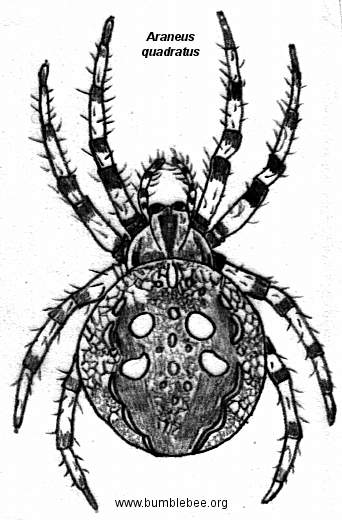 Above is Araneus quadratus, the 4 spot orb weaver, probably the heaviest British spider - one weighed 1.174 g, and another weighed 0.33 g but the eggs she had just laid weighed 0.76 g, and weights as high as 2.25 g have been recorded! The spider gets its scientific name from the 4 spots on its abdomen.

The female is 9 - 20 mm long, and the male 6 - 8 mm long. The colour of both sexes varies from pale yellow to red/brown. The abdomen in the female increases hugely in size when she is heavy with eggs. It is found in tall grass, heather and bushes. The web is around 40 cm in diameter, and usually less than 1.5 m off the ground when there is a suitable site. The female often builds a retreat off to the side of the web where she sits and waits. Adults are sexually mature in summer and autumn. They are common in Britain and northern Europe.