Below is another spider in the Araneidae family, Nuctenea umbratica. It has a flattened abdomen and is rather dull coloured. During the day it is found under bark and in dark crevices, all this makes it rather hard to spot. One of its favourite hiding places is in folded up garden furniture. The female is 11- 14 mm long, and the male 9 mm. The female is seen throughout the year, but the male is seen in summer only.

It emerges as it starts to get dark and spins its web to catch night-flying insects, the most common prey item being moths. It can take moths 7 or 8 times its size. It is able to do this as it has a fast-acting poison that quickly paralyses the prey. There is a line running from the centre of the web back into the spider's retreat. The spider sits in the retreat with 2 legs on this line to detect any vibrations on the web. 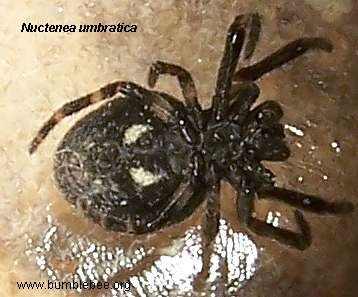 The photograph above shows the underside, and below how the spider looks from above. 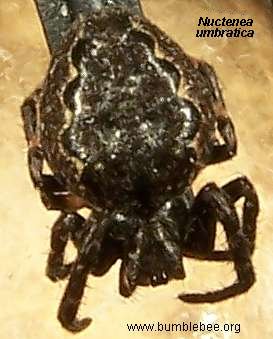 This spider is found in low vegetation, bushes and trees. It is common throughout the U. K. and northern Europe.

The red patch above the spinnerets (see the photograph above) is the diagnostic to identify this spider.

The size of the web is small, just a few cm wide, and it is messy and disorganised compared to others in this family.

Adults mature in summer and autumn. And are most commonly seen May - September. The female, above was already wrapping up a small prey item - a fly I think - when the unfortunate butterfly blundered into her web.

The mature male, above, was found in my greenhouse in July. Surely one of the most attractive spiders around. His legs are wonderful.

Also in the Araneidae family are the bolas spiders. These spiders hang from a silk thread holding its bolas (a sticky ball of silk on a thread) by one leg. It swings the bolas so that it sticks to a passing moth. Then it reels the line, with bolas and moth in. There are bolas spiders in America, Africa and Australia. In tropical America it was found that the prey items of the local bolas spider were all male "armyworm" moths. When the bolas spider was studied further it was discovered that it produced a chemical which imitated the female armyworm's sex pheromone. The the poor male moth thought it was flying towards a female eager to mate. Even more research has found that the Bolas spider can change the female imitating chemical it releases over the course of the night to exploit the different flying times of the male Noctuid moths of different species.

Another member of this family is Nephalia sp. from New Guinea. Their huge webs are so strong that humans use them to catch fish.