There are 2062 Thomisidae spiders world wide, and 27 in the U. K. The drawing above shows the typical arrangement of eight eyes in the Thomisidae family, and the drawing below the typical body shape. It is easy to see how they were given the common name of crab spiders. Usually they have a broad body, and the front two pairs of legs have sturdy spines to help in prey capture.

Thomisids can live in a wide variety of habitats, and are often masters of camouflage. Some (mainly those which capture their prey while they lurk in flowers) even have the ability to change colour.

They tend to sit and wait for their prey then make a quick grab with their first 2 pairs of legs, injecting a relatively powerful and quick-acting venom. Because of this method of prey capture none of them spin webs for ensnaring prey, nor do they wrap up prey in silk and store it for later. They capture and eat prey items one at a time. The potency of the venom allows them to capture prey larger and heavier than themselves, even bumblebees can be taken. They also have the ability of walking sideways which gives them their common name of crab spiders. Many of them tend to be slow moving for spiders. 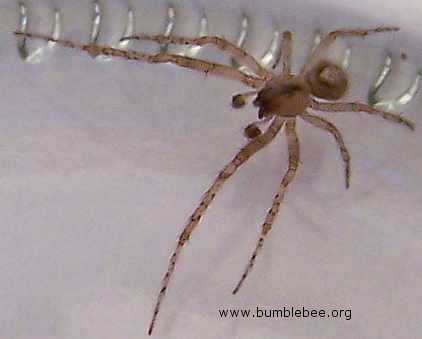 There are 17 species in this genus in Europe, and 12 in the British Isles. They have long spines on the head, see above. The abdominal pattern is usually a series of triangles, see below. Although the abdominal pattern doesn't vary the colouration can vary considerably within a species according to their surroundings. They tend to be found on the ground or in low-lying vegetation waiting to ambush passing prey. The eggs sac is smooth and flat and usually attached to low vegetation and guarded by the female.

In the Thomisids mating usually lasts 5 - 45 minutes, and the male is usually free to escape without being eaten. However some Thomisids, in the Xysticus genus such as X. lanio and X. cristatus (below), have a curious courtship. The male is slightly smaller than the female. He climbs over her body tying her down to the ground with numerous lines of silk which he spins over the front half of her body and legs. Then he pushes up her abdomen and squeezes underneath her to insert a sperm-loaded palp in her epigyne. However after this the female just gets up and walks away. The silk does not restrain her, so we do not yet know what is the purpose of the male tying her down.

There are 17 species in the Xysticus genus in Europe. The abdominal pattern is usually a series of triangles and bars, but identification to species level is difficult. Most species are found on the ground or on low vegetation. The egg sac is flattish, white and usually attached to low vegetation. It is guarded by the female, but she may die before the spiderlings emerge.

Xysticus cristatus is the commonest in the genus, the female body length is 6 - 8 mm, and the male is 3 - 5 mm. They can be found throughout the U. K. and northern Europe. The individual above is a female. She can be identified as cristatus because of the diagnostic black/dark mark on her carapace which I have indicated with a red arrow. As with others in this genus they can be found on the ground or on low vegetation, and are intolerant of shade. They are sexually mature in spring and summer.