Bryozoa are also known as moss animals, sea mats, polyzoa, corallines and ectoprocts. They usually occur in colonies in the shallows, and are often mistaken for algae or sponges. There are about 4300 described species, and they have no fossil record until the Ordovician. The U. K. has eleven freshwater species.

Individuals are minute, usually measuring less than 0.5 mm long (see Bowerbankia sp. below). Some species are erect, branched or lobed, whilst others are flat and moss-like. The lophophore (see below which shows the lophophore from the side and above) can be retracted when the animal is disturbed. The tentacles are covered with cilia, the beating of which sets up a water current to collect food particles. The particles are then passed down the cilia to the mouth. A freshwater bryozoan colony can be up to 5 cm long.

The eggs or statoblasts of some freshwater species can withstand freezing and desiccation, and usually germinate in the spring.

They are usually found in clear ponds and lakes on the undersides of water-lily leaves or the upper surfaces of stones, weed and shells. A colony can move about 10 cm a day, and can extend for over a metre.

Below the lophophore, which is shaped like a horse shoe. 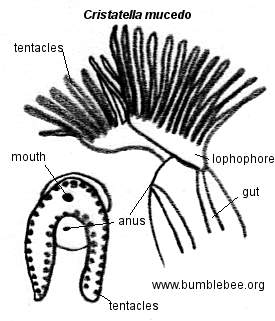 Below is a Triphyllozoon sp. colony. They are found in Australian waters. In this particular colony there are over 5 million individuals.

The bryozoan above has a number of names, and can be found in the N. E. Atlantic on rocks and boulders. This particular colony was playing host to scallops. Colonies can grow up to 2 metres across, and give shelter to many animals. This is the largest bryozoan to be found in British waters. The plates of the colony are formed of two layers of animals lying back to back. It is orange-brown when alive, but the colour fades in death.

Above are some individuals of Crisatella mucedo a freshwater bryozoan. A Cristatella mucedo colony looks like a piece of furry jelly. It is found in clear ponds and lakes on the upper surface of plants and stones over which it creeps. It prefers exposure to the light. Its colonies can sometimes divide in 2 through the middle. It is also possible for 2 colonies to fuse together into one.

Below is Adeona sp., found in Australian waters. 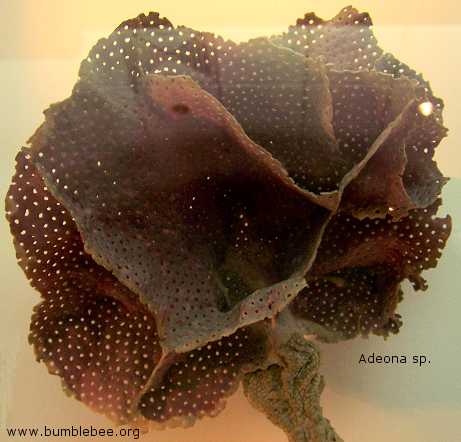 Below is a fossilized Chasmatopora furcata, a bryozoan from the early Ordovician, about 450 million years ago, found in what is now Estonia. 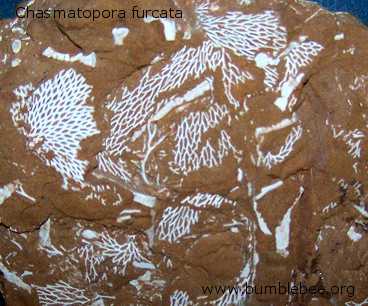