Shipworm and piddocks are the boring bivalves

Shipworms and piddocks have evolved to use the edge of their valves to bore into wood and even into rock. The anterior end of the shell is usually serrated to aid the boring action.

Teredo norvegica, the common shipworm, above

Teredo norvegica became known as the shipworm because its shell is greatly reduced, (it lies towards the bottom of the image), and ontains only a small part of its body. The rest of the body lies in a chalky lining secreted as it burrows, so it does look worm-like.

At one the time it was not understood how shipworms could have evolved before man started building boats and structures in the sea. It takes millions of years for animals to evolve and man has been building boats for only a few thousand years. However now it is known that timber is quite plentiful in the oceans especially near great river estuaries and after storms, so the evolution of the shipworm did not need the presence of boats, or of man.

The larval shipworm settles on a piece of timber and starts to burrow. As it burrows the foot grips the side of the tunnel and the siphons are protected by two calcareous flaps. Food is obtained through the siphons, but the shipworm has the ability to digest the cellulose of the wood it drills into. It can cause considerable damage to wooden ships.

The oval piddock, Zirphaea crispata, above, bores into rock. As with the shipworm, the foot holds the animal in place while the rocking backwards and forwards of the valves rubs away the rock. The valves do get worn down by this action, but every now and then the mantle edge creeps over the edge of the valve and deposits another layer of chalk.

The European piddock, Pholas dactylus, is found in the N. E. Atlantic, North Sea and English Channel, above. It bores into soft rocks, e.g. chalk, sandstone and clay. It can be up to 12 cm long, excluding the siphon which can add another 12 - 24 cm to its length. In the dark it phosphoresces a blue/green light.

Below is a drawing of Pholas sp. showing the rock-cutting teeth and the siphon. 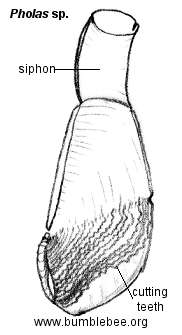