Mussels attach themselves to surfaces by a thin guy rope called a byssus (see below). These are placed on the anchoring surface by the foot (see below), and enable the mussel to withstand battering from the sea.

The scar inside an empty mussel shell shows where the adductor muscle pulling the two shells together anchors.

Mussels are both freshwater (see below) and marine, and are filter feeders. Water enters through the siphon. Compare the very muscular foot of the common cockle with that of the mussel. The mussel uses its foot much less. Mussels often live in large groups and can cause problems for coastal power stations by blocking the pipes of their cooling systems.

The Horse mussel, Modiolus modiolus, above, is usually found deeper than the low water line, most commonly at 5 - 7 metres deep. It can be found all around the U. K. coast, but is more common in the north and west. It is also found along the Atlantic coast of North America from the Arctic down to Florida, and on the Pacific coast from the Arctic down to California. It lives partly buried in sediment, but can attach itself to solid substrate.

It can grow up to 20 cm long and live for up to 50 years, making it the largest European mussel. Small mussels are preyed on by crabs and starfish, but those larger than 6 cm have few predators.

Horse mussels are important as they help stabilise mobile sea beds, thereby creating habitat for many other animals. Trawling and dredging destroy these habitats. The mussel beds or reefs are held together by the byssus threads of live and dead mussels that have tangled with dead mussel shells and any other detritus.

The Date mussel, Lithophaga lithophaga, above, is also known as the Date shell. It is found in the N. E. Atlantic, the Mediterranean and the Red Sea.

As can be seen in the photograph above it bores into rocks aided by secretions from its pallial gland. Previously the mussel was considered a delicacy, but because collecting the mussel usually involved destroying the rocky habitat, the collection in many countries has now been banned or restricted. 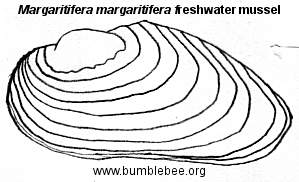 Above is Margaritifera margaritifera, the pearl mussel, a freshwater mussel. Fully grown specimens can reach 150 mm long, and can live fore 190 years. Large pearls are rare; most pearls are around 2 mm in diameter. It is found in large, fast rivers with sand or gravel beds in which it buries itself. Recently it has declined through pearl collecting. 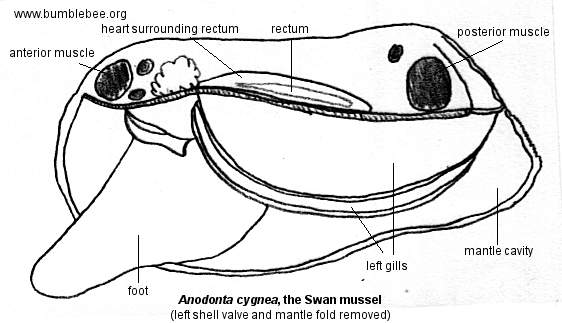 Above is Anodonta cygnea, the swan mussel. The shell when fully grown can be 15 cm long and olive brown. It is found in firm mud in canal bottoms, slow river and lakes.

The eggs are produced from June to August, as many as 500,000 per individual. They are kept in the outer gills which now become brood pouches, and are fertilised by sperm carried on a water current from a nearby male.

After 9 months they leave the brood pouch and become parasites of fish for 3 months. After the 3 months are up the miniature mussel drops off the fish and, hopefully, lands in mud.

Above is Pisidium sp., the pea-shell cockle or Pea mussel. It has just one siphon. It is common in sand and mud of all types of fresh water including marshes, ditches and mountain tarns.

It is hermaphrodite and viviparous producing fully developed young. It is very small, just 3 - 5 mm, and buff coloured.