Although this is a relatively small Class, the Branchiura is economically very important. There are about 200 described species, all less than 3 cm long. They are dorsoventrally flattened, nearly all parasitise marine and freshwater fish and they are commonly known as fish lice (see below). There are three British freshwater species..

They attach to their host's skin or gills by a pair of suckers, and feed on the host's blood and mucus through a sucking, tubular mouth. They have a shield-like carapace and compound eyes.

There are about 1000 species world wide in this class, most less than 3 cm length in 4 Orders:

Branchiopoda are unusual in that they occur mainly in freshwater. Most are small filter feeders. 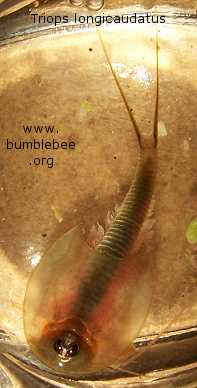 These are also known as triops (see above) and are commonly kept as pets. There are 11 species worldwide; all found in freshwater. They have a carapace covering the head and thorax, and up to 70 pairs of legs. Although they require quite specific conditions to hatch, e.g. pure, clean, predator free water. They are more robust once they are a few days old. However if you have them as a pet and have managed to get quite a few to hatch it is wise to separate them as they will eat each other in crowded conditions. They are omnivorous particle feeders. The particles, some quite large, are gathered by the numerous legs into the midline that runs under the body, and pushed forward to the mouth.

The eggs are laid into pouches located in the 11th pair of legs. The eggs, even when dried out or frozen, can survive for a long time, and in arid windy areas are blown around; this enables colonization of new, temporary water bodies, some even as far distant as oceanic islands. Some populations are hermaphrodites.

Notostraca are often described as "the oldest living animal species on earth". Triops canciformis first appeared 220 millions of years ago in the Triassic. Triops langicaudatus, above, appeared a little later. It is the species most commonly sold as dried eggs to be raised as a pet.

In the wild they are found in temporary water bodies, especially in arid areas.

All Anostraca have long bodies with 20 or more segments, see Branchinecta above, and a Chirocephalus diaphinus female as seen from above, below. C. diaphanus is found in freshwater, and is one of just two British freshwater species. It is semi-transparent, without a carapace, and most of its 11 pairs of legs are similar in shape, so it is considered "primitive". It is sometimes found in pools that dry up during the summer. It can be up to 35 mm long, and swims on its back. It is never still, and the constant movement of its legs creates a current of water bringing food particles down a food groove to its mouth, and oxygen to its tissues. It has a pair of large, black eyes. The first pair of antennae are simple and unjointed; the second pair are broad, and in the male, large and complicated. The gut is visible. Eggs can survive in dry mud for a long time. 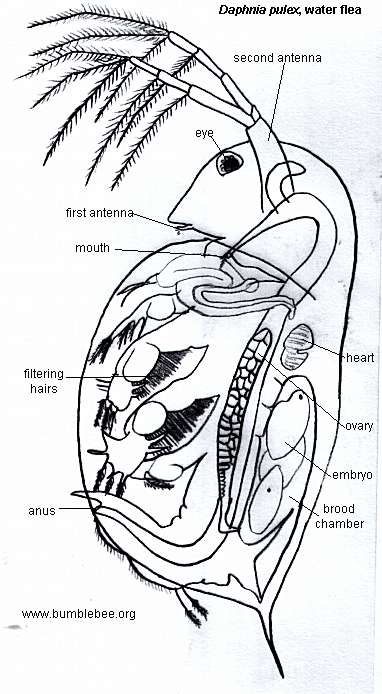 The best known Order are the Cladocera (water fleas see Daphne pulex above) with the carapace covering the entire body. Most are less than 5 mm long. They are found mainly in freshwater and there are around 450 species world wide, with 90 British freshwater species.

Water fleas swim using their second pair of antennae - the first pair are sensory. The down stroke moves the animal upwards, then it slowly sinks. The other appendages (legs, antennae) are used to filter food particles from the water, and are equipped with hairs to aid in this.

They are also unusual because for much of the year they are parthenogenic. Males are only produced when environmental conditions become unfavourable, i.e. when the weather cools. Then they produce "winter eggs" that have been fertilized. These survive the cold of winter, even below zero, and also drying out, enclosed in a pouch made form the carapace of their dead mother. These eggs hatch in spring. In some species, such as those found in the Arctic, males have yet to be found.

Some Daphnia are very prolific, e. g. Daphnia magna can produce broods of 100 eggs every 3 days in good conditions. In favourable conditions the females that hatch from these eggs can lay eggs of their own in 8 days. Egg laying and mating are coordinated. The young are released from the brood chamber or pouch a few hours before the mother moults, and the next batch of eggs is laid a few hours after moulting.

Water fleas can live for just a few weeks, or for as long as 6 months. They are found in shallow, weedy ponds, lake edges, and debris in still fresh water.

They are eaten by a wide range of animals, and are an important link in food webs. Their major predators include hydra, flatworms, newts, young fish and other Crustacea.