The barnacles are entirely marine, very modified in body form, and there are about 1300 described species.

The larva is free living, and has a carapace and compound eyes.

As adults they are enclosed in a shell of calcareous plates (see the drawing below), and are sessile, "a barnacle welds is head to a rock and spends the rest of its life kicking food into its mouth with its legs". A barnacle cannot detach itself from one surface and move to another. In all species the head is reduced, the abdomen absent and the legs have been modified into cirri (many joints with chaetae) for filter feeding (see below). 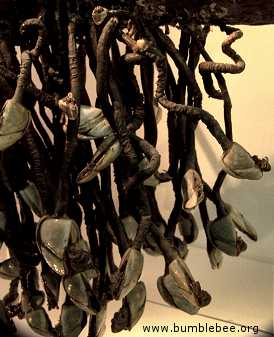 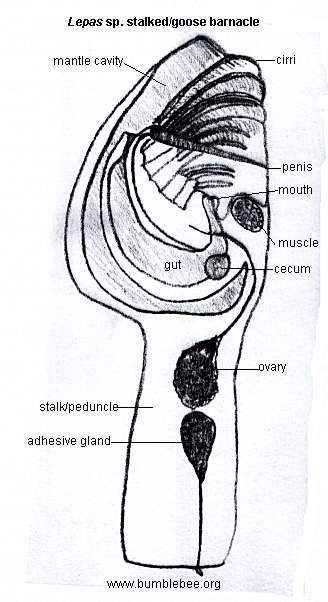 The close fitting plates (above) allow barnacles to colonise places which are periodically dry such as intertidal areas. Goose barnacles (see Lepas anatifera right, and Lepas sp. below) are attached by a fleshy stalk to floating structures and are found world wide. The stalk or peduncle can range in length from just a few mm to 75 cm.

Acorn barnacles, below, attach directly to the substrate. 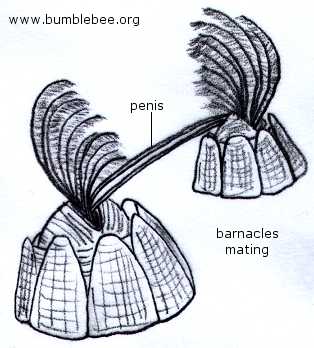 Barnacles often grow on the hulls of ships and can reduce the speed of the ship by as much as 40%, necessitating a visit to a dry dock to clear them off.

Barnacles are hermaphrodite, but must reproduce sexually. Each individual has both male and female sexual organs. The penis is enormously long (see above left) and can be extended many times the length of the body - an obvious advantage to an animal permanently attached in one place.

Below left is Balanus sp. showing the names and positions of the plates. 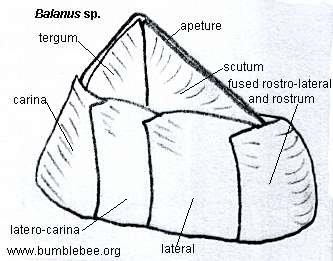 The photograph below shows 3 species of marine or brackish barnacle, Balanus amphitrite, Tetraclita rufotincta, and Chthalamus challengeri. Balanus amphitrite (the large species in the image) is found world wide in warm and temperate waters. It can tolerate, but not breed in water of low salinity, and is not found in water below 12oC. It fouls man-made structures such as ship hulls, harbours, buoys and desalination plant pipes. When fully grown its basal length can reach 20 mm. It is one of the most common barnacles. It has been found in British waters where it can survive in the warmer waters near power station outlets, but normal British sea temperatures are too low for it.