The Mystacocarida Class was first described in 1943. The first specimens were collected from beaches in Massachusetts and Connecticut. There are 12 species described so far; all are marine. They are found in interstitial spaces in shallow sediments. All are less than 0.5 mm long and show many primitive characteristics, see below.

There are twelve species of Tantulocardia, all microscopic 0.15 - 0.20 mm, ectoparasites of other marine crustaceans. The larvae and females attach to the host by an adhesive disc. Adult males are free-swimming. They are usually found in deep waters. 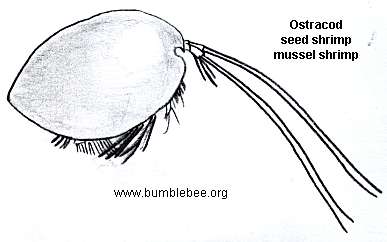 Ostracoda bodies are enclosed within a bivalve carapace making them look like tiny clams (see above and below). They are all small, ranging in size from 0.25 mm to 8.0 mm. The freshwater species rarely exceed 3 mm, although the largest marine species, Gigantocypris mulleri, can be as long as 30 mm.

There are over 8,000 described species, and they have existed since the Cambrian. They are widespread and found in both marine and freshwater habitats at all depths. 89 British freshwater species have been described. There are a few terrestrial species found in the moist leaf litter of forest floors.

They have diverse feeding habits including particle, plant, carrion and some are even predators on smaller animals. Some species are luminescent, emitting bluish light in bursts that last 1 - 2 seconds. They are difficult to identify down to species level.When disturbed, the shell valves close tightly, leaving nothing on the outside. From the side they resemble a bean, and from above they look like an egg. Like water fleas the movement of the antennae allow the animal to swim. A plate attached to the jaw vibrates setting up a current of water bringing oxygen to the shell.

The female lays her eggs on water plants. To the naked eye the batch of eggs looks like rust. In favourable conditions they will hatch in 6 - 8 weeks, but they can survive in dry mud as eggs for over 20 years before hatching. Below is Pionocypris vidua, a freshwater species. 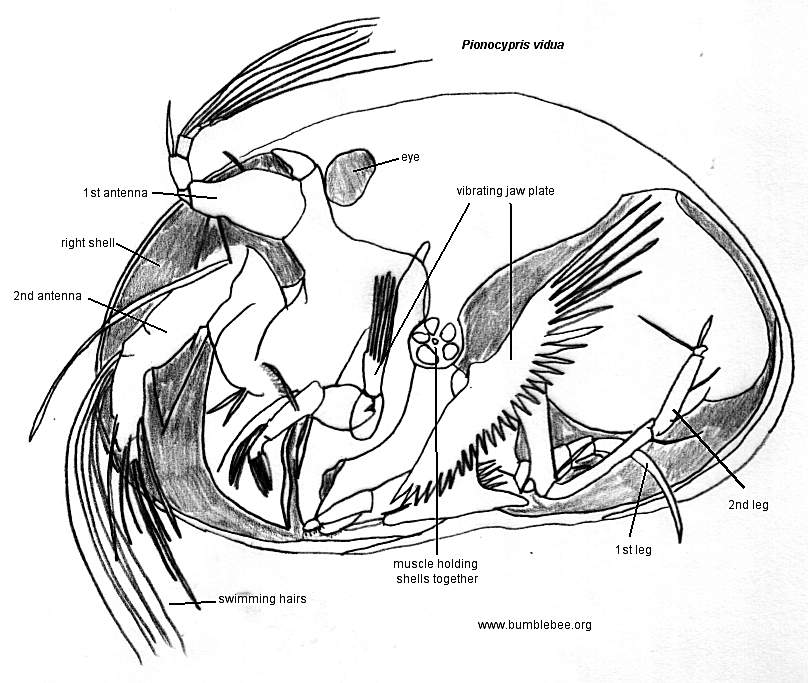 There are almost 12,000 species of Copepoda described so far, about 25% are parasitic, and nearly all are less than 2 cm in length. There are around 120 species of cyclops in the UK, all are very similar.

They are found in all kinds of freshwater habitats, where they eat food particles suspended in the water and dead animals. They are mainly marine, but perhaps the best known group are the Cyclops found in freshwater.

They have a characteristic body - club shaped body ending in a forked tail. Usually they have a single black or red eye. They have no carapace or compound eyes. The first pair of antennae is long and the second pair is short. 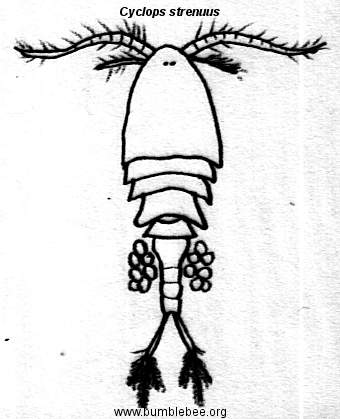 above a female copepod with bunches of eggs

The non-parasitic Copepods are the dominant members of marine plankton, so are important in the food chain. Above is Cyclops strenuous.

Most non-parasitic species have a life span of one year or less. Some of the freshwater species can secrete a cyst-like covering to help them withstand periods of drying out.

During mating the males use their antennae to grab females. Then the male simply attaches a sperm packet to the female's genitals. Both sexes use their antennae for swimming. Females can have one or two egg sacs each containing around 50 eggs (see above and below). One mating is all that is required to fertilise a few successive set of egg sacs.

below a parasitic copepod

Above is Ergasilus versicolor, a parasitic copepod which lives in the gills of freshwater fish. Only the female is parasitic. Note how the second pair of antennae are modified for grasping. 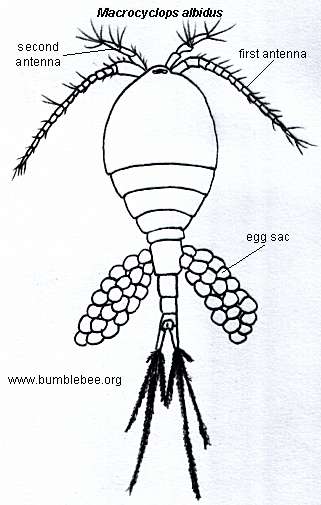