Shrimps are in the Crustacea Phylum. They have compound eyes on stalks. The first pair of legs are used in feeding and have pincers at the ends, the next 5 pairs of jointed legs are used in walking (below),

and have gills at their base. The rear legs are used in swimming and are called swimmerets (below); they are fringed with strong hairs or bristles. 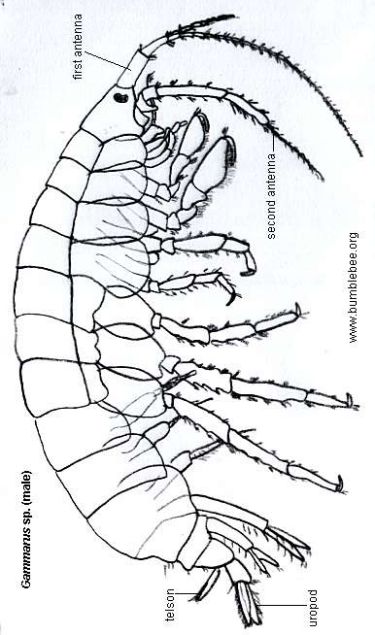 Above is a male Gammarus sp. Common in freshwater, and often found in very high densities. They can reach up to 3 cm in length. They prefer running water, and live under stones. 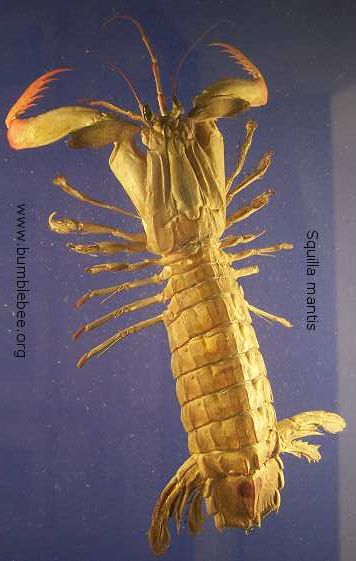 The spearing mantis shrimp, Squilla mantis above, so-called because its front legs resemble those of a praying mantis. Is found in the warm temperate East Atlantic and Mediterranean coastal waters. It digs a burrow in the muddy or sandy sea bed. It sits at the entrance of its burrow and shoots out its legs to catch any passing victim - usually other crustaceans, then pulls it back into the burrow to be eaten. The average life span is three years.

Some mantis shrimps have fluorescent yellow marks which they use in threat displays when faced with a rival for a mate or a predator.

A shrimp who sought his lady shrimp
Could catch no glimpse,
Not even a glimp.
At times translucence
Is rather a nuisance.
Ogden Nash