There are about 10,000 known Cnidaria species, and these are divided into three Classes (Hydrozoa, Scyphozoa and Anthozoa) according to whether the polyp or medusa stage is dominant in their life cycle. Many of the animals in this phylum are polymorphic. Generally polyps bud off or are formed sexually from medusae. Most medusae are mobile and the polyps tend to be sessile.

The main parts of the polyp and medusa body are shown in the drawing below. The epidermis is the outer layer. The gastrodermis is the inner layer of cells lining the gastrovascular cavity. The mesoglea ranges from a non-cellular, thin membrane to a thick jelly-like material lying between the epidermis and gastrodermis, and tends to be thin in polyps and thick in medusae. The tentacles aid the capture and ingestion of food particles. Polyps have a tubular body with the mouth facing upwards. Medusae have an umbrella-shaped body with the mouth in the centre of the concave undersurface.

The most interesting characteristic of the Cnidaria is the nematocyst (see the drawings above and below). They are located in special cells called cnidocytes. There are over twenty different types and they can be used in identification of species, although these can be grouped into three main functional types.

The nematocyst is a capsule containing a tubular thread with poisonous barbs. The lid of the capsule (operculum) may have tiny hairs or spines which when touched or vibrated cause the operculum to open. There is high osmotic pressure inside the capsule, so the opening of the operculum causes an inrush of water that pushes the thread out turning it inside out as it extends.

This exposes the barbs of the nematocyst to the outside; when they touch and penetrate prey they inject their poison or recoil with the captured prey. Each nematocyst is used only once. Once used the whole cnidocyte is absorbed or jettisoned and replaced by a new one. The nematocyst is not controlled by the nervous system; it is triggered by chemical or mechanical stimulation.

The Hydrozoa are mainly marine, and often colonial in the polyp stage. They are small animals, usually less than one centimetre. Their gas float is a modified medusa, and the tentacles are clusters of modified polyps. There are around 3,300 species.

The man of war Physalia physalis, above, is an example of a floating colony. It is found in both tropical and temperate waters. The colony is made up of 3 main types of animal; the digestive polyps, the reproductive polyps, and most infamous of all, the stinging tentacles which can trail up to 50 metres from the "float". Though very painful and dangerous to humans the venomous stings are not usually powerful enough to kill us. The gas float is a modified medusa and can be 10 - 30 cm long, and contains carbon monoxide. It can be deflated for defence allowing the whole colony to sink. They are preyed upon by turtles.

Sertularia cupressina, the sea fir, also known as white weed, above is found in the N. E. Atlantic and adjoining waters in shallow sands with pebbles that have strong tidal streams. Some species form a symbiotic relationship with green algae. Many species are dried, stained and sold for decorative purposes. 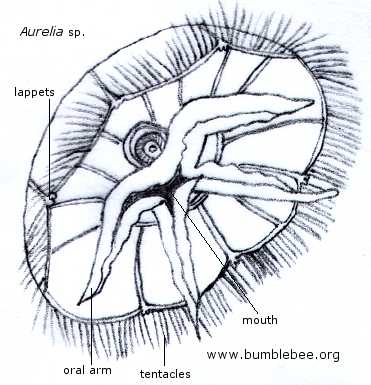 The Scyphozoa contains the larger jellyfishes, with some reaching two metres across the bell and with tentacles 30 metres long. Nomura's jellyfish, Nemopilema nomurai is 2 metres across and weighs 200kg. They are mainly marine and free floating, though they can "swim" by pulsations of the bell. In this Class the polyp stage is either reduced or absent. There are around 215 species. Aurelia sp. is a typical example (see above). The lappets come in pairs, and between them is a sense organ called a rhopalium containing a statocysts to give the animal information on its equilibrium and orientation, sensory pits, and, in some specie, ocelli (simple eyes). The oral arms capture prey. The tentacles are armed with nematocysts (see illustrations above), as is the entire body surface. Aurelia sp. has relatively short tentacles, and feeds on plankton. The plankton is passed to the mouth by cilia.