Above is Calathus melanocephalus. The adult ranges in size form 6 - 9 mm. It is easy to recognise with its characteristic tan pronotum, antennae and legs, with a black head and elytra.

It is found in open country, especially grassland throughout the U. K. and Europe.

Above is Nebria gyllenhali, also known as Nebria rufescens. It is usually found near streams, stony river margins, moorland and coastal areas. The adult is 8.6 - 12.0 mm long. Note the beautifully curved pronotum.

Carabus violaceus is an abundant species common everywhere in forests, open country, parks and gardens from Europe east to Japan. Adults are flightless and are seen mainly in the summer, usually under stones and moss. They are nocturnal, but when disturbed move quickly and then are easily seen. In the photograph above a mite is crawling over the head of the beetle. These mites are often seen on larger insects. They are harmless, and are using the insect as a means of transporting them to a more favourable position than they were in.

Below is a close-up of the fearsome jaws of this beetle.

Its favourite food is slugs, and it is because slugs come out when it is wet that the beetle's other common name is rain beetle. Usually slugs defend themselves from attack by producing copious quantities of sticky mucous, but Carabus violaceus prevents this by stunning them with a sharp blow to the mantle. Recently it has been found that Carabus violaceus will also eat the vine weevil, so any gardener should cherish this beetle.

The larva (above) hibernates over winter before pupating into an adult, although adults can also overwinter. It grows up to 37 mm long, and has a reddish brown head. It is most commonly seen in the autumn, and is mainly nocturnal.

Below is Agonum albipes. In the U. K. most species in the Agonum genus occur near water. It is a fairly common beetle found throughout the U. K. and also in Europe, North Africa and Asia, usually near water. 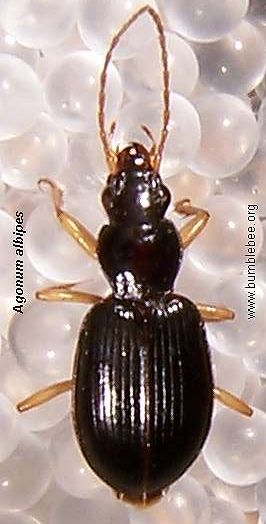 Below is Agonum dorsale. Unlike others in the Agonum genus this species can be found in drier areas such as open meadows, grassland and gardens. It is a really beautiful beetle with a dark green metallic sheen. Adults range in size from 5.8 - 8.2 mm long.