There are around 1300 species of stag beetle worldwide, and 4 British species. They get their name because the massive mandibles of the male (see below) resemble the antlers of a stag, and are used in a similar fashion - for defence and resolving disputes over females.

They have elbowed antennae. The males are always larger than the females. They range in size from 0.6 - 8.5 cm. The adults are nocturnal and either do not feed, or feed only on fluids such as nectar. Adult beetles have a particular fondness for sweet substances. In olden days they were called "cherry eaters", and will lick sweet sap from trees with their feathery tongues. In Northern Europe good sources of sweet sap can become favourite mating sites as numbers of beetles gather together. It has been found that ginger attracts stag beetles, both larvae and adults (as well as many other insects). In Japan adult stag beetles are kept as pets. 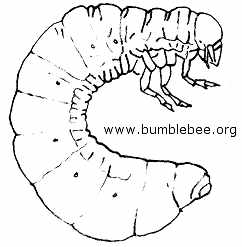 The Lucanidae larva (above) lives in the root stock of deciduous trees especially oak, ash, beech elm and hawthorn, and can take 5 or 6 years to develop. The larva can stridulate (produce sound) by rubbing ridges on the third pair of legs against a rough area at the base of the second pair of legs.

The drawing below shows a male stag beetle pupa.

The stag beetle, Lucanus cervus (above) is now rare, and in the U. K. is mainly confined to south-eastern England. Adult males can reach up to 75 mm long, making it the largest European beetle. The adult females (below) reach up to 50 mm long. The huge jaws of the male (above) cannot be closed with any force, so the beetle is no danger to man, in fact the female, with her much smaller jaws, can give a more painful nip. The male's jaws can make up around 20% of the entire body weight.

Adults feed off sweet sap running from tree trunks, rotting fruit and drink water which they lap up with a furry orange tongue. The adults fly at dusk in July making a whirring sound with their wings just before take off and landing. The flight speed has been recorded at 1.5 metres per second. Compare this with other insects.

At the end of summer the adult female beetle will search for some suitable dead wood in which to lay her eggs. Adult beetles emerge in May or June and live for just a few months.

The larvae eat rotting wood, and in the U. K. oak is the wood of choice, but elm, lime and beech are also used. The larval stage can last as long as 6 years. The larvae can stridulate by rubbing the 2nd and 3rd leg together, and it is thought that this is a means of communication.

In the old days some people believed that this beetle had the power to attract thunderbolts.

Lucanus lunifer, below. A stag beetle is from India.

The Giraffe stag beetle, Prosopocoilus giraffa, above, is the largest saw- toothed stag beetle. It is found in tropical rain forests in Asia from India across to Indonesia. Adults are aggressive and powerful, and males can be up to 11.9 cm long, and there has been reports of one reaching 12.4 cm. Females reach just 3.5 - 5.8 cm. They are always black.

The larvae feed on rotten hardwoods, and the adults feed on tree sap. The adults are found in leaf litter and on tree trunks.

Above is a pair of male Chiasognathus grantii, Darwin's beetle, Darwin's stag beetle which is found in Argentia and Chile in beech forests.

When the adult male climbs trees in search of a female to mate with he may encounter another male doing the same. The two will fight using their enlarged jaws to try to dislogdge the other so he falls to the ground. As they are usually quite high up this is enough to get rid of a rival. Darwin allowed a male to bite him and wrote the the jaws were "not so strong as to produce pain to finger".

Males can be up to 90 mm long, and females 25 - 37 mm. The adults feed on tree juices, and the larvae on dead wood and roots. The adults can fly, and do so just before dark. Like many moths they are attracted to light. The eggs are laid on or near dead, rotting wood. Pupation takes place in dead wood. Lifesapn is though to be 1 - 2 years, most of this is spent in the larval stages. The mail predators ae birds, rats and bats.