Cantharidae family - the soldier and sailor beetles, and the Lyctidae - the powder post beetles 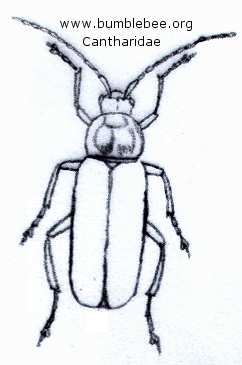 Often the elytra (wing cases) are red, black, blue or yellow, and are relatively soft compared to other beetle families. The adults are usually found in vegetation on flower heads, and are active by day.

Both adults and larvae are carnivorous, but they will both occasionally feed on plants. The adults have a short life span, and are only seen in the warmer months of the year.

Below is a Cantharidae larva. The body is usually covered with velvety hair. The larva prefer to eat worms, slugs, snails and other larva, and they pupate in the soil in spring.

Above and below is an adult Cantharis nigricans, the Grey sailor beetle. The adult length is 7 - 11 mm, and they are often found in flowers.

Below you can see it is scrabbling about the anthers of a buttercup. It is called the grey sailor because of the greyish down on the elytra (wing cases).

The Black-tipped soldier beetle above is also known as the bloodsucker.

Adults are 7 - 10 mm long and can be seen from June - September. They are commonly seen on flower heads in unmown grassy areas, this one is on a grass head. Adults feed on pollen and insects. Mating pairs are easy to spot as in this species mating takes a long time. In the photograph below the beetles were oblivious to me and my camera.

There are a few other species that are similar to this one but in the U. K. only this one has an orange-coloured first segment of the antennae with all the other segments being black. As one of the common names suggests it has black tipped elytra.

Larvae live in grassy tussocks or in the soil, and are predatory.

Above is Malthinus flaveolus, the Yellow-tipped malthine. The adult length is 4.5 - 5.5 mm. The adults is usually found in woods or woodland edges in bushes and grasses from may - August. The larva lives in rotting wood.

The adults have yellow tips to the elytra, and the elytra are shorter than the abdomen.

There are 6 species of Lyctidae found in Britain, but 3 of these are introduced aliens.

The larvae eat dry sap-wood, and produce a very fine dust almost like flour. The females have long ovipositors to deposit their eggs in cracks in wood. 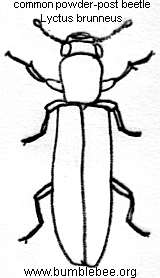 Lyctus brunneus, the common powder post beetle, above, is native to Britain, and has probably been introduced to many other parts of the world. It ranges in size from 2.5 to 8.0 mm long, and ranges in colour from chestnut brown to dark brown with clearly clubbed antennae. In comparison to the Anobiidae notice that the head is not hidden by the pronotum.

It is a serious pest of seasoned hardwood such as oak, ash and some tropical woods, and is mainly found in lumber yards, carpenters workshops and houses. Adults usually emerge from May to September. They are good fliers and fly towards light at night. During the daytime they hide in cracks and crevices. The female lays up to 220 long, cylindrical eggs with a thread-like tail which are pushed into the wood going with the direction of the grain. The eggs are translucent white, 1 mm long and 0.15 mm wide. The larvae feed for 1 or 2 years and reach a maximum length of 5mm, although this can be shorter if conditions are favourable, e.g. highly nutritious wood. Before pupation the larva bores to just beneath the surface where it pupates.

Discovering infestations. One of the commonest ways of discovering an infestation indoors is when adults are found around a window trying to fly away.