Beetles in the Curculionidae (weevil) family

There are over 50,000 species of weevil world wide, 5000 in Europe, and over 400 in the British Isles. Many are considered pests, e.g. the vine weevil, and the granary weevil (below), the cotton boll weevil, the grain weevil and rice weevil. Although palm weevil grubs are considered a delicacy in the islands of the South Pacific.

All Curculionids are vegetarian - mainly on plants, but a few eat fungus, and just a few are predatory. The females lay their eggs inside a plant by biting a hole first, or on their foodplant. Most adults have the characteristic snout (also called the rostrum) with jaws at the end, and elbowed, clubbed antennae extending from the snout (see below) usually with 11 segments. Adults range in length from 1 - 40 mm. The larvae (below) generally live in plants are are usually short, round, fleshy, legless and milky coloured. The adults generally feed on the outside of plants. Many are decorated with colourful scales which tend to rub off with age. 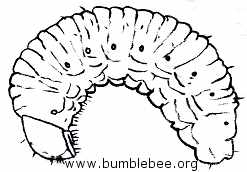 Below is a photograph of two weevil pupae that I found while repotting a plant. They are probably the vine weevil pupae. You can clearly see the legs eyes and wing cases. I kept these two and ...

this (below) is what emerged. As you can see the right elytron (wing case) is damaged, this may have happened as I was handling whilst repotting my plant. Anyway I am pretty sure, but not certain that it is the vine weevil, and as I felt guilty about disturbing it I put this one back on a potted plant. Within minutes it had disappeared, probably into the soil.

The adult vine weevils are dull black with small patches of dirty yellow on the elytra, and are flightless. The adults range in size from 8.0 - 10.5 mm. They are slow moving and usually active after dark. Sometimes an adult will be found on the inside of a closed window when you get up in the morning. This probably means that you have an infested indoor pot plant. If you re-pot the plant you may find ten to hundreds of fat C-shaped grubs (see the drawing at the top of the page), or even weird looking pupae (photograph above). Don't throw them out. Put them in a dish and leave them out for the blackbirds - they love them! The larvae feed below the soil surface and the adults eat the leaves. Most vine weevils are females and they can reproduce parthenogenetically - so no need for a male or sex. The eggs are usually laid on the soil surface. Ground beetles are a major predator, as are commercially available nematodes. 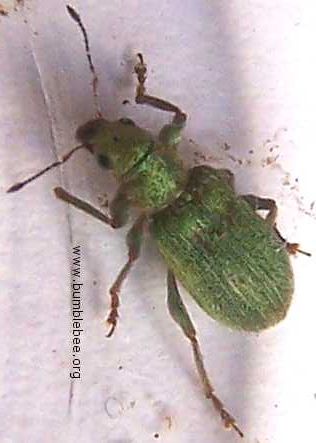 Pachyrhinus lethierryi is a very pretty small weevil that was first recorded in the U. K. in 2003. It is often found on cypress, and it is believed it was introduced from Europe on garden plants. The one above was found in a newly planted garden. It is native to Europe, and is found across to Asia Minor and the Crimea. It is a strong flier for a little beetle. Like many weevils it is covered in colourful scales. These can wear off with age leaving black patches. Adult body length is 3.6 - 4.5 mm. 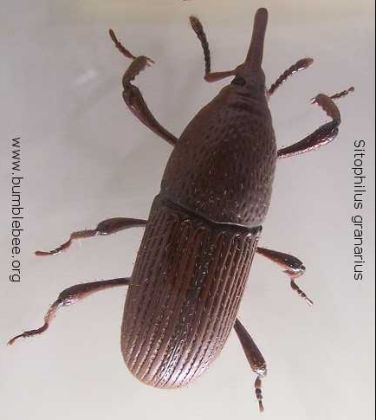 The Granary weevil or grain weevil, Sitophilus granarius is a pest of stored grain, and its body length is 2.3 - 3.5 mm. Adults emerge from a grain, then mate - they cannot fly, so a mate is found by walking. The female drills a hole in a grain and lays a single egg, then plugs up the hole. The egg hatches and the larva begins to eat its way through the grain. It pupates inside the grain, and then emerges as an adult to start the cycle again.

Sitophilus granarius is sometimes placed along with some other grain weevils in a separate family called Dryophthoridae or Rhynchophorinae.

Above is an adult Pine weevil, also sometimes called the Large pine weevil or Spruce weevil, Hylobius abietis, native to northern Europe and Asia. The body length is from 8 - 14 mm. It is common in Scotland, but less common in England. Adults are seen mainly from April to June. Females lay eggs on pine and spruce roots, although they can also eat larch. They prefer weak or dead trees. The adults prefer trees less than 6 years old. They feed on the bark at the base of young trees, and can cause tree death, so are considered a significant pest in Europe. One generation can take from one to three years.

The photograph below is a close-up showing the long, yellow, hair-like scales on the elytra.

The larvae feed on the inner bark and then the sap wood, and pupate inside the tree. They can grow up to 18 mm long.

Salvinia molesta is a floating aquatic fern native to South America, but spread accidentally since 1939 into many tropical rivers, lakes and canals. Its growth is favoured by warm, nitrogen rich water, and it can spread vegetatively. It has no natural enemies outside South America, so rapidly became a serious pest completely blocking waterways and disrupting the livelihood of people who depended on the water for transport, irrigation and food, especially fishing, rice and sago palm. The problem was especially bad in the Sepik River in Papua New Guinea where some villages had to be abandoned as the locals could no longer make a living. By 1980s 2000 km2 of water surface was covered. This was too expensive for manual, mechanical or herbicide removal. Biocontrol was the answer.

In Brazil the fern is controlled by a weevil, but it appeared that certain Salvinias have their own species specific weevils. So the Salvinia had to be correctly identified, then its specific weevil identified. This took until 1978. Previously the Salvinia had been mis-identified. Once the correct weevil had been found and released success was rapid. In Papua New Guinea the villagers were able to re-occupy their villages and live their lives as they had done before. In Sri Lanka the economics of bio control were studied in detail and a cost/benefit analysis was done. Returns for financial investment were 53:1, and labour investment was 1678:1. the team responsible for the ecological research leading to the bio control were awarded the UNESCO Silence prize in 1985. It was recognised that taxonomists had made essential contributions by establishing the true identity of the salvinia and the weevil. The weevil in question was new to science.