The Tabanidae are commonly known as horse flies, stouts, gad flies, deer flies and clegs. There are around 4400 species world wide, and 30 species in Britain.

The adults are mainly gray with brown markings, and beautiful, bulging, iridescent eyes, which in the males are so large that they touch. The mouthparts are similar to that of a mosquito, though broader and more like a knife. They are not really blood suckers, as they do not suck up the blood, but rather lap the blood flowing from the wound they have cut into the animal. The adult males feed on nectar, and are vegetarian. It is only the adult females who lap up blood from horses, man and other large mammals. They are fast fliers.

The larvae (below) live in damp soil and rotten wood, woodland pools, bogs and silty beds of slow moving water, but they are not fully aquatic, and need to breathe air through their rear or front end. Although they can remain submerged and inactive for quite a while. They can be up to 25 mm long, and are pointed at both ends, with a tiny, retractable head and a breathing siphon at the tail end. They pupate in the soil. They have swellings between the body segments - see the drawing below - that help them move around in muddy places. They are fiercely carnivorous and may even be cannibalistic. 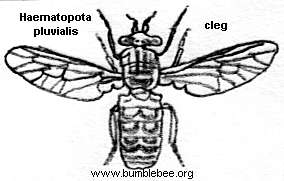 The female Haematopota pluvialis, right, approaches and lands silently on a patch of skin. It is only when she stabs her mouthparts thought the skin that the pain alerts us to her presence. She is greyish-brown with mottled wings, adults are 8 - 13 mm long. Adults are common near water from June to August.

Other Tabanids make a certain amount of noise as they approach. Flight speed has been recorded as 4.0 metres per second with a wing beat of 96 per second. Compare this with other insects. 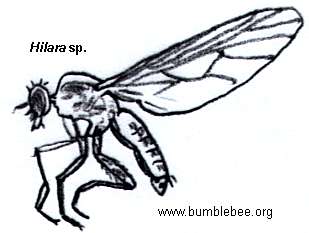 The Empididae are small and medium sized flies. There are over 3000 species world wide, and 212 British species, which fly during the day. Above is Hilara sp., the adults are black, up to 10 mm long, and eat Ephemeroptera and Trichoptera.

The larvae live in soil, decaying vegetation or water, depending on species, and are partly predatory.

The adults congregate in swarms over or near water, and this gives them their common name of dance flies. The head is usually spherical on a thin neck (see Hilara sp. above). They prey on other insects catching them in flight. The jabbing proboscis is used to suck the juices of other insects. They will also suck nectar from flowers. Adult males can produce silk from their swollen front tarsi.

Mating. When ready to mate males catch and kill an insect, wrap it up in a silk parcel, and present it to the female just before mating. If the parcel is accepted then mating will take place. It is thought that the unwrapping and eating of this parcel during mating prevents the female trying to eat the male. In some species the males cheat and offer the female a tangled ball of silk with nothing inside. Some have even gone further and wrap up some useless object they have found, so that the parcel has some weight. 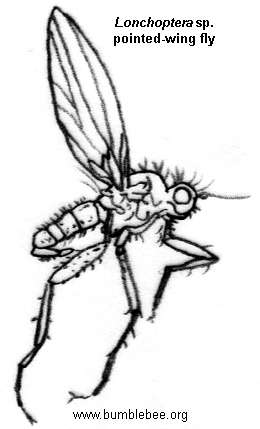 There are 7 British species of Lonchopteridae, and 37 species world wide. These are also known as Musodoridae and the pointed-wing flies, for obvious reasons - see the drawing of Lonchoptera sp. above. They are found in humid habitats such as marshes and damp woodland. The larvae (below) are flattened and live in leaf littler where they feed on rotting vegetation. The adults are small, around 3 mm long, and have brownish wings. 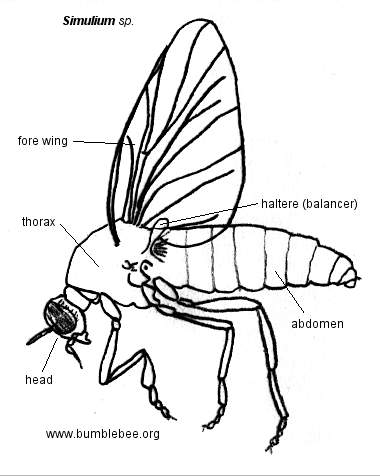 The Simuliidae are commonly known as the black flies. There are 35 British species, around 40 species in Northern Europe, and 2100 species world wide. In the U. K. the adults fly from March to November. The adults (see above) are small (2 - 3 mm long), grey, have broad wings and thick antennae. The female bites man, usually where the skin is softest, e. g. near the eyes, and ears, and a large number of bites can cause fever and dizziness. In the U. K. they are not normally vectors of disease, but in the tropics species in this family transmit river-blindness.

The female lays her eggs in a jelly mass or in strings on stones and weeds near the edge of fast-flowing water.

The larva (see below) enters the water when it hatches out of the egg and attaches itself to the underside of a stone, or a plant leaf or stem. It is cream or grey in colour and eats plant particles. It feeds by filtering food particles from the water current that flows through the mouth brush. The presence of black fly larva in a stream is an indicator of clean, good quality water as the larva require water with a high oxygen content.

Before pupating it constructs a silken cocoon and attaches it firmly to a solid object.

There are 608 British species of Chironomidae, and over 5000 world wide, most of which are difficult to identify to species level. The adults are 2 - 12 mm long, with a black or grey body, and clear wings, and are like gnats. The males have hairy antennae (see below). The males swarm around dusk, and dance for the females who sit safely on the ground or on vegetation. When a female has made her choice of male she flies up to him and they mate on the wing. They can be seen throughout the year in the U. K. Few species have jaws strong enough to pierce human skin.

Most species have aquatic larva, but other larva live in moss, dung, rotting wood or decomposing vegetation. Many of the aquatic species have precise environmental requirements, and so can be used as an indicator of water quality.

Chironomous sp. (above), are often known as Bloodworms and the U. K. species can grow up to 25mm long . In this genus the eggs are laid in gelatinous strings. In some species the larvae are red. This is caused by haemoglobin in their blood. In other species the larvae are colourless. Those with haemoglobin usually live in mud tubes which are constructed of mud particles held together by silk. The colourless species tend to live amongst floating vegetation. The tube dwellers move their bodies about to set up a current in the water to obtain oxygen. They do occasionally leave their tubes and swim to the surface. The 2nd last segment has 4 gills and the last segment has 4 retractable anal gills (see above). The larvae eat organic material in the mud. They are found in still waters. The pupa of the tube dwellers is formed inside the tube.