These are the gnats and mosquitoes there are about 3500 species world wide, and 34 British species. Many in this family are of medical and veterinary importance, e.g. some species transmit the pathogens which cause malaria (see Anopheles maculipennis below), yellow fever (see Aedes aegypti below), filariasis, zika, West Nile virus, elephantiasis, and dengue. It is the females who suck blood to get the protein needed to produce eggs. Some females can drink three times their body weight in blood in a single meal. Dengue fever was eradicated from the USA in the 1950s by DDT spraying; it has now made a comeback, and is being transmitted today in Houston, and perhaps other places. Dengue in its acute form is thought to affect 110,000 - 200,000 people annually in the USA.

In 2018 malaria infected 219 million humans and killed around 435,000. Most deaths were of sub-Saharan children under the age of five. Climate change means that mosquitoes can now survive and move to new areas and infect children who were previously out of their range, and tomorrow they will expand their range further as the weather becomes more favourable to them.

Before modern medicine, mosquitoes were used in the treatment of syphilis. The malarial fever passed on by the mosquito to the human could raise the human body temperature above 40oC, and this halted the progress of syphilis. Having malaria was very much the lesser of two evils.

It is believed that flies from in the Culicidae family have killed more people than any weapon yet devised by man. In fact of the 100 billion humans who have ever lived around half have been killed by malaria - just one of the many diseases transmitted by mosquitoes. And in South and Central America it is thought that 95 million natives died after the colonists from Europe unintentionally introduced the malarial mosquito.

Most of the British adult Culicidae are less than 6 mm long, have long legs and clear wings.

The adults have mouthparts adapted to both pierce and suck. Mosquitoes inject some saliva into the bite wound. This saliva contains chemicals that reduce blood clotting in vertebrate blood. The female requires this blood meal to nourish her ovaries and enable her to produce healthy eggs. When she injects this tiny amount of saliva she may also inject the various disease inducing pathogens too.

The antennae have 13 segments and are plumed in the male. The way to tell a male (non-biting) from a female (biting) is to look at the antennae (above). The male has very bushy, plumose antennae, whilst the female has simple antennae (see below on Anopheles sp.). The antennae of the male is precisely tuned to pick up the exact frequency of the female's whining flight. This enables him to locate a suitable mate.

The larvae and pupae are active swimmers. Above is the larva of the common gnat (Culex pipiens). The eggs are laid on a stagnant water surface (in the U. K. this is usually from April onwards) and the larva are aquatic. The larva feed on protozoans and other small organisms. They breathe through a tiny snorkel-like tube, so an oil film spread on water will cause them to die as the tube cannot break through the film.

Below is the pupa of a Culex sp. mosquito. It has breathing tubes, and at rest it lies suspended in the water with its breathing tubes just pushed slightly above the surface. 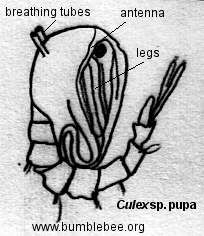 After pupating the males feed on nectar and plant juices. Generally the males hatch a few minutes before the females, and dance in the air waiting for females to emerge. In most species the females need a blood meal in order to lay eggs.

Individuals rarely fly more than a few hundred metres from their hatching site, however mass invasions of towns can occur from as far as 100 kilometres.

The common gnat usually gets her blood meal from birds, not man. Females of the common gnat hibernate as adults though the winter. They will have already mated and the males will all die once the weather gets cold.

When the female punctures skin she injects an anaesthetic which deadens the pain, and an anticoagulant to stop the blood clotting and to thin it making flow up her tubular tongue. She can drink up to three or four times her body weight in blood. In the U. K. the Culex pipiens does not transmit disease, but in some countries it transmits West Nile Virus.

Adult males live for just over a week, but females can live as long as a month, and if it gets cold before she has laid her eggs she can hibernate. In temperate climates there can be 15 generations in the spring, summer, autumn period. 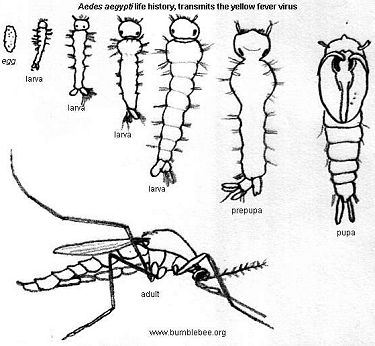 Mosquito flight speed has been recorded as 0.9 metres per second. Compare this with other insects.

Africa is thought to be the origin of malaria. It accompanied humans as they spread through Asia, Europe and the Pacific. It is believed that the disease reached the Americas with the post-Columbus slave trade.

In the 5th century Hippocrates associated malaria with marshes. The Romans gave us the term malaria from the Italian meaning bad air. At the time it was through that the foul smelling marsh gases caused the disease. To combat this the Romans set about draining many marshes.

Around 1600 powder made from the bark of the Peruvian quinine tree was found to alleviate the symptoms of the disease. After WW1, in which many soldiers died of malaria, researchers developed anti-malarial drugs such as chloroquinine, which was developed in 1934. And by 1900 the life cycle, and the part played by mosquitoes in the transmission of the Plasmodium protozoa had been discovered. So it was known that protection from mosquito bites provided protection from the disease.

Then in 1936 the insecticidal properties of DDT were discovered and huge programs of spraying eradicated the disease from Brazil, Egypt and the USA. Unfortunately resistance to DDT soon developed and there was a resurgence of the mosquitoes in many areas that had been disease free. Today about one million humans die annually from malaria, and around 300-500 million more catch the disease and are consequently ill, resulting in loss of earnings, absence from studies, etc. which impacts not just on the sufferer, but on their families, too.

Below is an adult Anopheles maculipennis, a malarial mosquito. The abdomen has 8 segments. Around 40 species of mosquito world wide can transmit one of the four the protozoa Plasmodium sp. to humans, the mosquito below is just one of them.

The female lays her eggs on, or very near water in batches of 40 - 100. The larvae hatch in 2 or 3 days and feed on particles (mainly algae) in the water. When conditions are favourable the transition from larva to pupa can take as little as a week, during which the larva will moult 4 times. The pupal stage is more active and lasts for 2 or 3 days. When the adult is about to emerge the pupa straightens, sucks in air and floats to the surface. The skin splits longitudinally along the thorax, and the adult emerges.

A cloud of cumbrous gnats do him molest,
All striving to infix their feeble stings,
That from their noyance he no where can rest,
He brushes oft, and oft doth mar their murmurings.
from Edmund Spencer's The Faerie Queen