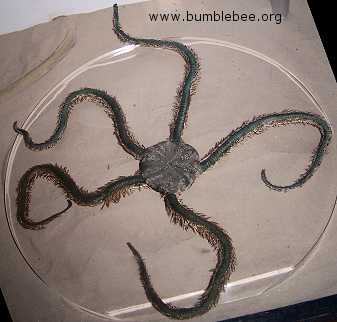 These are the brittle stars, below. They bear a resemblance to the starfish.

There are about 2000 species, found on the sea bottom at all depths. However, unlike starfish these are neither scavengers nor suspension feeders.

They are flat with a central disc and (usually) five long, thin arms, see below. The ossicles of the skeleton are fused, and the arms are used in locomotion. The tube feet are used in feeding. They have no anus or pedicellariae and the madreporite is located on the under surface. The mouth has five jaw-like plates. 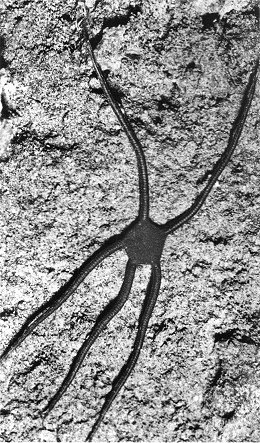 Brittle stars feed on microscopic plankton, both plant and animal organic particles, and some feed on larger items such as bristle worms or small crustaceans.

They are negatively phototropic, i.e., they move away from light and tend to be more active at night.

Reproduction. The sexes are usually separate, but a few species are hermaphrodites, and asexual reproduction by disc cleavage is possible.

Below is Lapworthia miltoni, a fossil brittle star form the late Silurian, (423 - 419 million years ago). It was found in what is now Herefordshire, England. 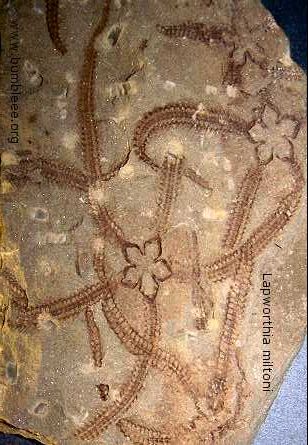 Basket stars have highly branched arms. They are usually active at night, and hide during the day. They ensnare small prey by opening up their arms in a water current and using them rather like a net.

Above is Gorgonocephalus arcticus, the Northern basket star. As its name suggests it can be found in the Arctic Ocean. In typical basket star fashion is feed by coiling and bending its arms to ensnare prey in the passing water current. They prey items get caught on small hooks on the basket star's arms. It prefers locations that have strong currents. Recently there has been a steep decline in populations of this species mainly due to bottom trawl fishing, but also collection for the aquarium trade.

These were discovered in 1986, and only two species have been described so far. 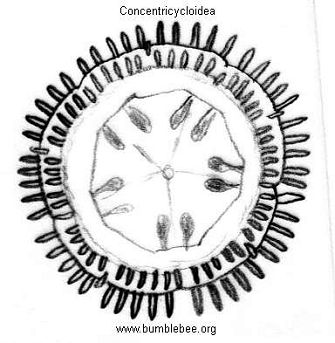 They are flattened, circular, with a row of spines around the circumference, and measure about 2 - 9 mm in diameter.

They have tube feet around the edge of the disc, and their upper surface is covered in scale-like plates. However they have no mouth, anus or arms.

So far they have been found in deep water around New Zealand. Superficially they look like a small jellyfish (see above).