The Echinoidea (sea urchins, sand dollars, etc.) are a Class in the Echinodermata Phylum.

Echinoidea are found on the bottom of all seas at all depths. Urchins tend to prefer rocky or hard surfaces, whereas sand dollars prefer to burrow in sand.

Reproduction. The sexes are separate and fertilization is external. 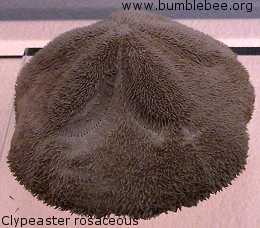 Clypeaster rosaceous, above, aka Clypeaster rosaceus, is an example of the sand dollar or sea biscuit, it is found in the Caribbean. Sand dollars have short spines, and are bilaterally symmetrical.

Sand dollars bury themselves in sand leaving part of the body exposed to catch small particles of food.

Above is Rotula orbiularis it is found off the West African coast.

Above is Plagiobrissus grandis, the Long-spined sea biscuit, on the top with its spines, and on the bottom with the spines removed to show how the five arms of the typical Echinoderm have been incorporated in the the solid body of the urchin. Fully grown specimens reach 22 cm long.

This sea biscuit can be found in Caribbean waters at depths of 6 - 400 m, but most commonly it is found around 50 m deep buried in sand or other sediment where it feed both day and night. Normally the spines are flattened against the body, but become erect when the animal is disturbed. Its main predators are conches.

The Keyhole urchin, Encope emarginata, above, can be found around the Pacific coast of Central America and in the Caribbean where it burrows in sand and mud at a depth of 3 - 5 m. Its body is covered with fine, short spines, and its colour ranges from orange to brown and dark purple.