The starfish and sea stars are a Class in the Phylum Echinodermata . There are about 1500 species of sea star and starfish, that range in size from 1 - 100 cm in diameter. 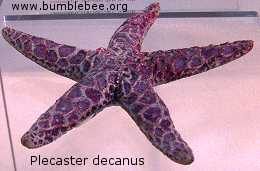 They have a flattened body with five (sometimes more) fairly broad arms (see above). It is quite common for starfish to re-grow an arm that has been lost to predation or injury, but only certain species (see below) can grow 4 completely new arms. There is usually an ocellus (primitive eye) at the end of each arm, but their sense organs are not well-developed. The mouth is on the underside and the madreporite and anus on the upper surface. A groove runs from the mouth to the tip of each arm, and rows of tube feet, most with suckers, are situated along either side of the groove. The water-vascular system opens to the outside through the madreporite. The anus is inconspicuous in most, and a few species lack both anus and intestine.

The skeleton is a loosely organised series of small calcareous plates (ossicles) bound together with connective tissue, and is located beneath the epidermis which has pedicellariae (small forceps, scissors or clamp shaped calcareous structures).

The pedicellariae keep the body surface free of debris, and may function in prey capture; they are also used in identification of species.

Most have separate sexes, but, some Asteroidea are hermaphrodite and are capable of releasing as many as 2.5 million eggs in 2 hours. Reproduction is also possible by fission. To do this the starfish sheds one arm, and this shed arm then grows another 4 arms.

Predatory species may have an eversible stomach. This means the stomach can be inserted into any small hole in the prey's armour and digestion can proceed from there. Bivalves are commonly preyed on in this manner. They are mainly nocturnal. Above right is Plecaster decanus found in southern Australian waters.

The Common comet starfish, above, can be found in the Indo-Pacific oceans. Its colour ranges from green through to brown, blue and red. The larger arm is the one that originated from the parent starfish that reproduced by fission.

Protoeaster linkii is found in tidal pools and down to 100 m deep in the Indo Pacific. Its many common names arise from its thick, upright, red tubercles running along each arm.

It is carnivorous and can grow up to 30 cm across. When small it eats algae, then coral, sponges tube worms, clams and almost anything else as it grows. It is active during the day, and because of its striking colours this makes it a popular choice in large aquariums.