The Caenidae nymphs (see below) prefer muddy or sandy environments. The drawing below shows the typical body shape of nymphs in this family. There are nine British species all with three tails.

Ephemerella ignita (above) can be found in a wide range of running waters, but rarely in still water. 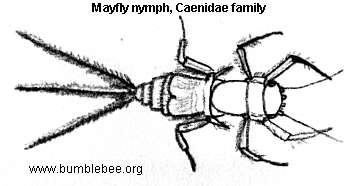 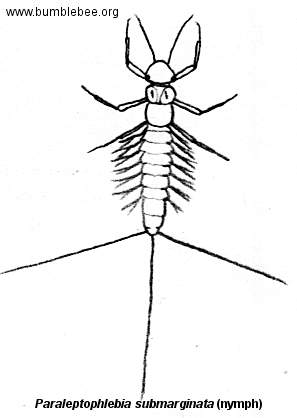 There are 6 British species in this family. In the Leptophlebiidea the nymphs often have tails as long as or longer then their body, and the tail filaments are usually held quite widely apart (see above). They tend to crawl around in silt or live in burrows and cavities, and are not very good swimmers.

Above is the nymph of Paraleptophlebia submarginata, also known as the Turkey Brown. Note that the gills are split into 2 blades. These nymphs are not very good swimmers and tend to lurk in vegetation or on dead leaves, which gives them some camouflage. Nymphs are up to 12 mm long excluding the tail. Adults fly April - July.

Below is the nymph Habrophlebia fusca, and has the common name Ditch dun. Its body length can reach 8 mm, so it is quite small. It is usually found in small, slow flowing streams and weed choked ditches.

There are 11 British species in the Heptageniidae family. Nymphs in this family are known as stone clingers. The typical nymph body shape is flat, broad and fat with strong legs. The eyes are located on the top of the head. As the common name for the family suggests, they are found in fast flowing waters clinging on to stones. They tend to be poor swimmers. 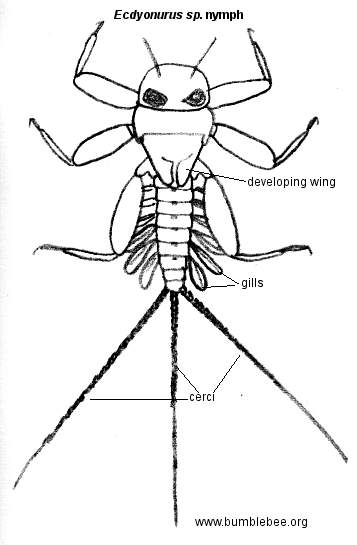 Above is the nymph Ecdyonurus sp. Note that it is broad and flat with large, flat legs. It is usually found in fast flowing water and lake edges.

Below is the nymph of Centroptilum leutolum, which has the common name of Small spurwing. The nymphal body length reaches 9 mm, and it is found in slow, weedy calcareous rivers and shallow weedy lakes.

The adult has 2 tails, and the hind wings are reduced to a thin, pointed spur - hence the common name. Adults can be seen as early as April, and as late as November, but are more commonly seen from June - September. The adult female attaches her eggs underwater to the stream or lake bed, and then drowns.