There are species from this family found all over the world. Some are found in habitats which dry out temporarily.

The shells are coiled in a flat spiral, and the body is red as their blood has haemoglobin. The tentacles are long and thin, and the foot is short, ending in a point.

Above and below is the freshwater ramshorn snail, Planorbis planorbis. This snail has a small head and foot, and the tentacles are relatively long. Unusually it has red blood for storing oxygen. When fully grown it has 5 - 6 whorls. Below left you can see it has a keel which is closer to the undersurface of the shell. The shell is light brown and 14 - 17 mm in diameter when fully grown.

It is found in overgrown, stagnant water, muddy pools, creeks, ditches and swamps. It can withstand periodic dry spells.

It is found in Europe, Northern Africa across to Syria, the Caucasus and east to Lake Baikal.

Below are Planorbis planorbis eggs. The darker pink/orange dot within the egg is the embryonic snail itself. 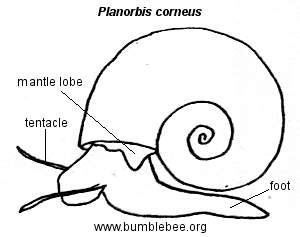 Above is Planorbis corneus, the great ramshorn, it is the largest British species in the genus. It has a dark, red/brown shell which can reach 3.5 cm in diameter. The shell is brown - brown-olive. There are albino varieties with transparent shells and bodies. Unlike many others in this genus it does not have a keel around the outer whorl of the shell.

It is found in calcareous ponds, lakes and slow-flowing rivers. It lays around 60 eggs at a time in a gelatinous capsule which is usually fixed to a plant. 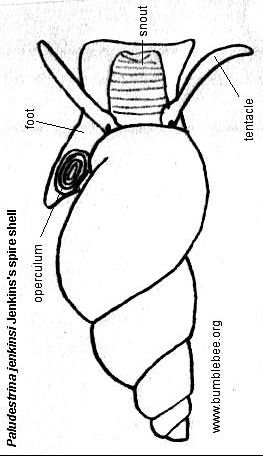 Above is Paludestrina jenkinsi, Jenkins's spire shell. It is dextrally coiled with 5.5 whorls when fully grown, and 4 - 5 mm in length. It is back/brown in colour.

Originally it was found in salty water only, but now it is to be found in fresh water. Females give birth viviparously to 20 - 30 young. They are parthenogenic. 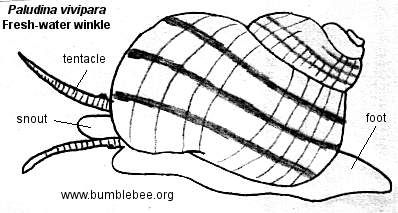 Above is Paludina viviparia, the freshwater winkle. It is parthenogenic and found in slow-running water. As its name suggests it produces live young (viviparous); about 50 at a time. It has a brown shell with 3 dark bands running round each whorl.

All have brownish shells, and flatish, triangular tentacles, with an eye at the base (see below).

Above is Limnaea truncatula, aka Galba truncata, the dwarf pond snail. When fully grown it is around 6 mm wide and 7 mm long, but some specimens can reach 12 mm It is dextrally coiled. It can live for some time out of water.

It is the intermediary host of the common sheep liver fluke, Distomum hepaticum, or Fasciola hepaticum. Inside the body of the snail the fluke passes through several larval stages. The final larval stage called a cercaria, bores its way out of the snail's body and climbs up a plant, and if eaten by a sheep, finds its way to the liver.

It is found in ponds, ditches and wet pastures. 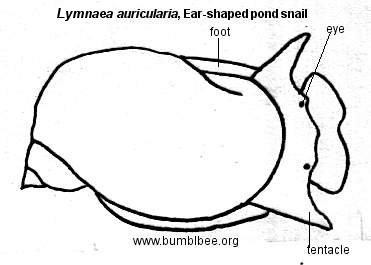 Above is Lymnea auricularia, the ear-shaped snail or ear pond snail . It is fairly common in larger water bodies. It is dextrally coiled, the last whorl of the shell and the opening are large and ear-shaped. Its height when fully grown is around 25 mm, but some individuals can reach 35mm.

It breeds early in the year and dies afterwards, so few adults are seen after June. It is found in calcareous lowland lakes and slow, weedy rivers.