Above is Triton australis

Giant triton, Charonia tritonis is above showing its growth stages. It can grow up to 60 cm long and is also known as Triton's trumpet as the shell can be used to make trumpet-like sounds. It can be found throughout the Indo-Pacific among shallow coral 1 - 40 m deep. It is one of the few animals that can feed on the Crown-of-thorns starfish, it also eats other Echinoderms.

Below is Strombus gigas, the Queen conch or the Great green conch. It is the largest North American mollusc, with some specimens reaching just over 30 cm. It is found in the Caribbean and surrounding waters; usually on sand. 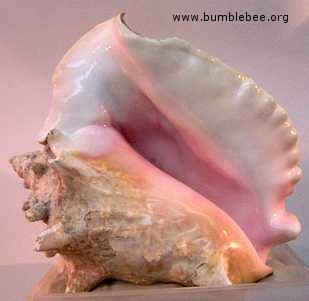 Below is Cassis madagascariensis which is often used by jewellers for carving cameos. It is a possible predator of invasive sea urchins, and is found in tropical and temperate oceans from surface to 1000 m deep. 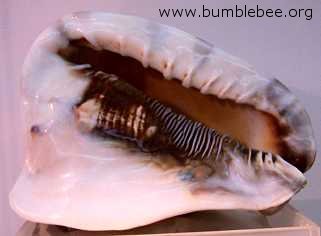 Above is the Shin-bone tibia, Tibia fusus fusus in the Strombidae family. It is found in the S. E. Pacific offshore in sandy waters. Its length is 23 cm when fully grown.

Chiagara spider conch, Lambis chiagra, in the Strombidae family, above, is found in the Indo-Pacific in the intertidal zone at depths of 1 - 30 m near the shore and on sand. It emerges to hunt at night and feeds on fish and worms.

Papal mitre shell, Mitra papalis, above, is found in the Indo-Pacific in coral reefs and under rocks. The average size is 10 cm.

The Sundial shell, Architectonica perspectiva, above and below is found in shallow waters on sand in the Indian Ocean and the Western Pacific. The whorls are flattened on one side rising to a steep spire on the other. There is a beautiful opening inside the spire that is wide and looks like a spiral staircase.