Above is one of the most commonly found snails in the garden, Cepaea nemoralis, the banded snail or Grove snail. It is found in western Europe in forests, thickets, fields, gardens, steppes and dunes. It has been introduced to other parts of the world. It tends to prefer more open habitats to Cepaea hortensis (below). Fully grown individuals have a shell with 4 1/2 to 5 1/2 whorls. The shell width is 18 - 25 mm, and height is 12 - 22 mm. The colour and stripes vary considerably from white and yellow through to pink and brown - see the photograph below. It hibernates in late autumn by digging itself into the ground and closing off the mouth of its shell with mucous strengthened with limestone. Its main predator is the thrush which uses a stone to crack open the shell. This is the snail often used in schools when pupils mark it to study movement. 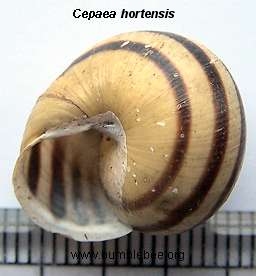 Above is Cepaea hortensis. It ranges in size from 14 - 23 mm wide when fully grown. The scale shown above is in millimetres.

Both Cepaea species hibernate over winter by digging into the ground and closing off the mouth of the shell with mucous.

The photograph above shows three Cepaea hortensis on a path one morning after rain. Snails 1 and 2 have passed chalk darts and are probably about to mate, but snail 3 seems to want to join in too. I don't know what happened. My dog wouldn't wait, and I know from experience snail mating can last hours, so we left them to it.

Above is a small terrestrial snail Cochlicella acuta. I found many of them on a white wall in Rhodes. It is around 10 mm long and 3-4 mm wide.

Some books say that they cannot be found as far south as the Mediterranean, but this is not the case. It is very similar to the slightly stouter Cochlicella barbara.

Clausiliidae family. Commonly known as door snails. The shells in this family are usually coiled sinistrally (to the left), are sometimes ribbed and narrow. The opening is small and there are usually teeth, folds and projections. There are over 150 described species in Europe.

Most live in forests and among rocks. They hide in crevices, under bark and in heaps of fallen leaves. At night, and when it is wet they crawl out onto rocks or up tree trunk in search of their food - algae and lichens.

Cochlodina laminata (aka Marpessa laminata), the painted door snail, or plaited door snail above is common throughout Europe and is associated with birch trees. It lays its eggs in August and September. The young take 2 years to reach maturity, and it is only then that the characteristic teeth at the shell opening develop. The shell has fine, irregular grooves, and is yellow-brown, reddish-brown, height 15- 17 mm, width 4 mm. It is found in woods beside trunks and in bark.

This snail can be as much as 30 cm long. Originally it was found only in East Africa, but it has been introduced to most other parts of the world. in certain areas of southern Asia it has become an agricultural pest, and in others it is a popular pet.