Bed bugs (below) are in the Cimcidae family. There are about 100 species in this family found worldwide on birds and mammals. They are usually 4 - 12 mm long, have small compound eyes, and all suck blood through their rostrum which is kept folded underneath the body when not feeding. 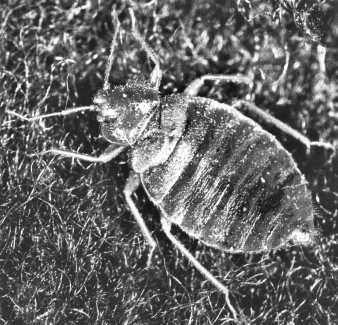 There are 3 species associated with humans:

They are all flat and reddish brown.

There are 3 species of bed bugs found in the U. K.

Bed bugs can crawl over many vertical surface including wood, plaster, paper and dirty glass - they cannot crawl up smoother surfaces. The insect increases its weight from 2 - 6 times after a full meal, and it takes just 5 - 10 minutes to fill itself with blood. A hungry bedbug can drink around 14 mg of human blood at a single feed.

They can withstand long periods of starvation - at least 2 months in normal indoor temperatures - and there have been reports of individuals surviving a whole year without feeding. They can also withstand temperatures below freezing. As can be expected they are usually found in bedrooms. They are active at night, and during the day they hide in crevices, behind pictures and wallpaper or in bedding. In areas of high infestation 5000 bugs have been counted on a single bed. They locate their host by smell and body heat. In the UK they are not thought to transmit disease.

Main feeding activity is after midnight. Individuals feed once every 1 - 2 weeks for 5 - 10 minutes at a time. 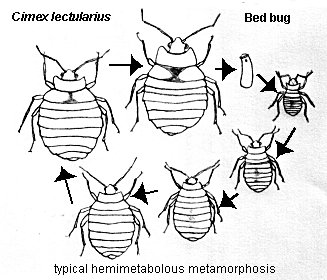 The bed bug egg is laid in cracks and crevices and cemented into place with glue. A well-fed, healthy female can lay up to 500 eggs in her life, usually at a rate of 3 - 4 per day. The eggs measure around 1.0 x 0.5 mm.

There are 5 nymphal stages, and the transition from one stage to the next can only occur after a blood meal, and the nymphs are capable of sucking blood as soon as they hatch out of the egg.

In good conditions an adult can live for as long as 18 months, but 2 - 10 is more usual. The drawing above shows typical hemimetabolous metamorphosis, i.e. after hatching from the egg the change to adult form is gradual, and there is no resting stage in a chrysalis. Their compound eyes have around 30 facets. Males have a more pointed end to the abdomen than females.

Bed bug mating habits are rather unusual. There is no courtship, and the males practice "traumatic insemination", see the drawing above where the male is the smaller. This means that the male simply injects his sperm into the female's body by stabbing it with his sharp sexual appendage.

It is thought that the bed bug may have evolved from a blood-sucking bug found on bats when early humans shared the same caves as bats.

Bedbugs have no wings, and they rely on passive transportation to spread and colonise a new area. Infestation is most common through buying infested bedroom furniture. In some cases as many as 5000 bugs have been found in a single bed! They can also be transported from infested rooms in suitcases, and even in clothing that has been hanging next to a wall. They travel to adjacent rooms and houses through cracks in brickwork and joinery.

Infestations are usually identified by finding the bugs themselves, their dark faecal matter, and, of course, bites. Shining a strong light on them can cause them to move and help locate them.

How to treat an infestation of bed bugs

Destroy both mattress and bed, sofa or whatever piece of furniture they are in. Put them out of the window, if you can, rather than risk carrying them through the house and spreading eggs. Either destroy all the other contents of the room or, put the contents in plastic bags whilst in the room, then put these bag into a freezer that can reach temperatures of -20oC or lower, and leave the bags there for at least 24 hours. That should be enough to kill any eggs and bugs. Then get professional pest controllers to treat the room, and make sure they have experience in elimination bed bug infestations. Just killing live bugs is not enough, they must also kill all the eggs, too.

More recently infestations have occurred when travellers have returned from hotels. In this situation throw out the suitcase and its contents. If you really need to keep any of the contents then turn on all the room lights. Get a suitable sized plastic bag to contain whatever it is you must keep. Gently open the suitcases and place the items in the plastic bag and seal it. Then put the plastic bag in the freezer as mentioned above. Close the suitcase and dispose of it as soon as possible.

Some people develop severe itching after being bitten, and this can usually be relieved by applying hydrocortisone cream.