The bug below belongs to the Pyrrhocoridae family, many of which are seed eaters. This is Pyrrhocoris apterus (the fire bug), and is the only member of the family found in Britain, though it is not common. In Europe it can sometimes be seen in huge numbers in spring crawling through the vegetation. It hibernates throughout the winter as an adult.

The shield bug above and below is Picromerus bidens, the Spiny shield bug, one of the 17 species in the Pentatomidae family in the U. K. There are about 5000 species world wide, and around 20 British species, and as their common name suggests the body is shield-shaped.

Picomerus bidens is 13 - 15 mm long when fully grown, and has 2 spikes jutting out from its thorax. It is commonly seen from June - September.

If you are a gardener and you come across this bug then cherish it as it eats the poisonous caterpillars and leaf-eating beetles that birds cannot. It is fairly common in and around woodlands from late summer onwards.

The female lays eggs in batches of around 30 at a time on the stems and leaves of shrubby plants in the autumn. In the summer the eggs hatch and do feed on plants at first, but then move on to caterpillars and beetles. In milder areas it is possible for the adults to overwinter, but in cold areas all the adults will die off, with only the eggs surviving the winter cold.

In the photograph below you can just see its rostrum or beak folded under its body.

This family of shieldbugs differ from most others as their tarsi (segments of the feet) have only 2 segments instead of the more common 3. There are 5 British species.

The hawthorn shieldbug, Acanthosoma haemorrhoidale (above), is one of the most common bugs in the Acanthosomatidae family . As its name suggests it lives off hawthorn flowers and berries, and the overwintering adults feed on the leaves. It will also eat oak, birch and whitebeam. It feeds by piercing the leaf with its rostrum (beak). Saliva passes down the rostrum into the leaf and liquidises the leaf tissue which the hawthorn bug then sucks up.

Adults are 13 - 15 mm long, green and brown, and some have red shoulders. Wingspan is 1.6 cm. The adults mate in spring. The female lays white, barrel-shaped eggs in batches on the undersides of leaves; around 20 eggs in each batch. The eggs hatch in around 9 days and the young remain near the shells until after their first moult. Then they begin feeding. Young can be seen from May - October.

There is one generation a year and they overwinter as adults. They are common in Britain, Ireland and Europe. Some books state they tend not to be found as far north as Scotland, but this one was found in Aberdeenshire on hawthorn.

Hawthorn shieldbugs are preyed on by birds and spiders. Like many insects if roughly handled the hawthorn shieldbug can exude a smelly fluid that can stain clothes. This is to deter predators, and also give the bug its other common name of stink bug. 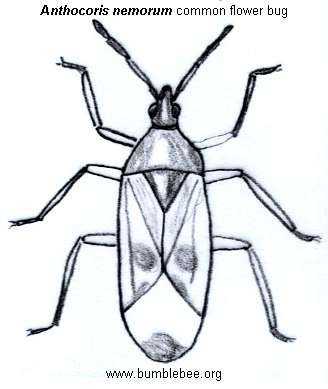 Above is Anthocoris nemorum, the common flower bug. Body length 3.5 - 4.0 mm. It has a black head and prothorax, with a black, red/brown and white abdomen.

It feeds on plant lice, aphids, thrips, mites and insect eggs, so if you're a gardener it is a good thing to have on your plants. It can also suck plant sap, but cannot survive on a wholly vegetarian diet. Its proboscis can pierce human skin, and may leave an itchy spot.

The eggs are laid in the spring by females who have mated the previous year. In most years non-mated females and males do not survive the winter.