A wasp's nest is constructed of chewed wood mixed with saliva, see the photographs below. Warning to those with small screens, some of the images below are a very large size, this is deliberate in order to show you as much detail as possible. The wood is obtained from unpainted fence posts, fences, tree trunks, and garden furniture that is unvarnished or untreated. The wasps scrape off small pieces of wood, and the sound of the scraping is audible, in fact the wood can act to amplify the sound enough to wake you up if it is the soffit board outside your window that they are scraping. The wood pulp is chewed and mixed with saliva, then spread in layers. It dries to a papery consistency and builds up beautiful and interesting patterns as can be seen in the photograph below. 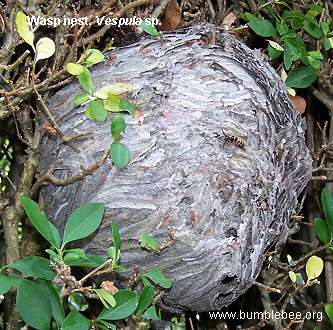 Here is a short video of a worker scraping wood off a pallet.

Unlike the social bees, wasps have no wax glands and construct their nests solely out of chewed wood mixed with their own saliva. You can see just how powerful the jaws of social wasps are by looking at the photograph of a common wasp queen's head here.

Above is a damaged wasp nest, either Vespula germanica or Vespula vulgaris. This nest was in a privet hedge and was found when the hedge was being trimmed. Wasps are very sensitive to any activity around their nest, and will stream out in great numbers at the slightest disturbance. Even if something passes the entrance/exit flight line it may come under attack.

Both of these species can also build their nests underground, in hollow tree or wall cavities, bird boxes, or any suitable sheltered site. A very successful nest can contain 10,000 cells, and so occupy a large space. The total number of wasps hatched from such a nest will be greater than the number of cells, as the cells are reused. It is possible for a very successful wasp nest to produce as many as 20,000 individuals.

The photograph below shows the 2 lowest tiers of the nest above. One tier is held to the next by just a few posts of chewed up wood pulp. The tiers would be facing downwards. Note that the cells are empty. This nest was removed long after the nest had come to a natural end. There were still a few dead wasps in the nest which enabled it to be identified as a Vespula germanica, German wasp nest.

The photograph below is the wasp's eye view of the tiers above.

The photograph below shows the post or stalk that would have connected to an upper layer of cells.