Butterflies in the Lycaenidae family

The Lycaenidae are commonly known as the Hairstreaks, Coppers and Blues. There are 20 British species. The adults are small to medium sized and often metallic-coloured. The beautiful colours are due to the microscopic structures on the scales. Their flight is short, quick and agile. In some species the caterpillars are associated with ants. Many of the caterpillars in this family have a gland on the 7th abdominal segment which can secrete a sweet fluid. 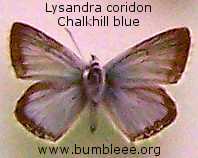 Above is an adult male Lysandra coridon, chalkhill blue. The female has brown wings with sometimes a trace of blue on the forewings, and is slightly larger. This butterfly is fairly common all over central and southern Europe. In the UK it is found only in south-east England. As its common name suggests it is found on chalk and limestone hills. The adult wingspan is 30 - 36 mm, forewing 15 - 18 mm. Adults fly in July and August. In the UK there is one generation a year.

The green eggs are laid in August on Horse-shoe vetch, but do not hatch until the following spring.

The caterpillar feeds on vetches and trefoils, and is carried by ants to a suitable foodplant near the ant's nest. The ants "milk" a gland on the back of the caterpillar which exudes drops of a sweet liquid.

A fully grown caterpillar can be up to 16 mm long, is quite fat, but very tapered at both ends. The body is green with yellow stripes. In the UK the caterpillars feed on horseshoe vetch for about 10 weeks, then pupate on the ground in a greenish-brown cocoon at the base of the foodplant.

Lycaena phlaeas, the Small copper is above and below. The adults are very active fliers, and so difficult to photograph. They are common in open country where there are flowery banks from sea level up to 1800 m. They can have 3 generations a year under favourable conditions. In the U. K. they fly from February onwards. The adult males and females look similar, though there is a wide colour variation in this species. They are found from the Arctic as far south as North Africa and right across Eurasia, and also in North America. Forewing is 12 - 15mm, wingspan 26 - 36 mm.

The eggs are yellowish, and laid singly on the underside of sorrel and dock on which the caterpillar feeds.

The caterpillars that emerge late in the year overwinter in silk on the foodplant. Caterpillars can be up to 15 mm in length and their body shape is short and stout and tapering towards the end. They are green with a purple/red line down the back, and another along each side just below the spiracles.

The pupa is brown and attached to the foodplant by a silken girdle.

Above is the Centaur oak blue, Arhopala pseudocentaurus. The underside of the wings have a beige, tan and brown patterning that, when closed camouflage the butterfly well when it is resting against bark or on fallen leaves. It is found in India and east Asia in rainforest and humid deciduous forest. Its wingspan is 48 mm.

Like many in this family the caterpillar is attended by ants. The adult female lays her eggs in batches of up to three on a foodplant which also houses the nest of the appropriate weaver ant species. The eggs hatch after 2 or 3 days, and on hatching the caterpillar has a flattened, almost woodlouse-like appearance. The young caterpillar feeds on the young leaves of the foodplant making a shelter of some into which it can retreat when it feels threatened. As it grows and moults it is attended by ants, who are rewarded for their protection by a sugary fluid that exudes from a gland on the caterpillars back. This sugary exudation continues even in the early days of pupation.

The White letter hairstreak, Satyrium w-album, above, is also known as Strymonida w-album. It is widely distributed throughout Europe, and as far east as Japan. In the U. K. is it mostly confined to the south, becoming rare in the north, and absent from Scotland. It is found in woodlands and hedgerows.

There is usually one generation a year. The eggs are laid singly in the forks of twigs of the foodplant tree in July and August. The caterpillars do not hatch until the following March, and eat their way into the flower buds. Later they feed on leaves or twigs of the foodplant. The caterpillar grows up to 15 mm long, and is slug-like and a pale green/yellow. Its foodplants include wych elm, English elm, lime, etc. Adults emerge in June and favour bramble flowers. The common name comes from the w mark on the hindwing. Wingspan is 30 - 32 mm, forewing 15 - 16 mm. The adult female is usually larger and paler.