Butterflies in the Pieridae family (whites)

The Pieridae family are commonly know as the Whites, Sulphurs and Orange tips. The family has a world wide distribution, and the adults are generally found in open, sunny areas. There are 11 British species in the family, and over 1000 world wide, though they are not found in New Zealand and some of the Pacific islands. The wingspan ranges from 22 - 70 mm in British species, and forewing length from 11 - 48 mm world wide. A typical Pierid flight pattern is a low, looping zig-zag. Some species engage in mass migration. The caterpillars are often green, and some are serious pests, e. g. the Cabbage white. 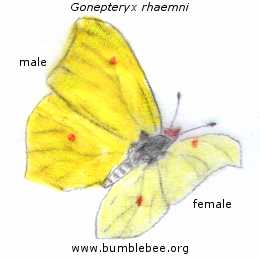 The Brimstone butterfly above, I have drawn the male colouring on the left wing and the paler female colouring on the right. The males are the only bright yellow butterfly in the British Isles. The female is much paler and is sometimes mistaken for a cabbage white butterfly (see below). The brimstone is fairly common in central and southern England. Its range is from North Africa, Western Europe through Russia to Japan. It is found in light woodland and open spaces from sea level to 1800 m.

Eggs are laid in May and June.

The caterpillars grow up to 50 mm long, and feed on buckthorn and alder buckthorn.

The chrysalis is attached to a twig of the foodplant at the end of its abdomen, and has a thread around the middle of the body holding it in a sling to the twig.

Adults fly from March to October and hibernate over winter, and have a fast and powerful flight. Wingspan is 56 - 74 mm, forewing 26 - 30 mm. They have green undersides to their wings, so at rest they resemble a leaf.

Cabbage white, or Large white butterfly, Pieris brassicae has a range that stretches from North Africa across Europe to the Himalayas.

The eggs (below) are yellow and laid on the under surface of cabbage and nasturtium leaves in batches of 60 - 100 in May - August and are ridged and ribbed.

The female tests the plant for suitability as an egg-laying site using chemoreceptors on her feet. If she detects mustard oils (present in the brassicas - cabbage family) she will lay her eggs.

Initially the caterpillars (below) stay together to feed, but soon separate to feed alone. They break down the mustard oils in the leaves they eat and sequester these oils in their body as a chemical defence making themselves taste horrible, so predators avoid them. The yellow/green and black colouration is also a warning to predators that they do not taste nice.

Below is a drawing of a Cabbage white caterpillar's head.

The caterpillar can eat twice its weight per day in leaves. Once it has reached full size it stops feeding and starts to climb to find somewhere to pupate. It is at this stage that we can see the caterpillar climbing the walls of houses to pupate under gutters, around windows and in crevices.

Above is a chrysalis with the skin of its final larval moult hanging just below it. And below is the butterfly just emerged. She cannot fly yet until her wings are fully pumped up, so this is a very precarious time for her. This one is in my greenhouse, so not only is she safe and sheltered, but she is also warm and near nectar.

Cabbage whites are probably the commonest butterflies in the U. K. Adult females have more black than males (see above), and have 2 black spots on the forewing. Although the male seems white to our eyes, he has ultra violet patterns that are visible to the female. Fore wing length is from 28 - 33 mm and wingspan 58 - 63 mm. In the U. K. it flies from April to August, and can have two or three broods in a year. It is found in gardens, and anywhere there are flowers from sea level up to 1800 m. It is extraordinarily fond of my cabbages and lettuces, and although it is delightful to watch its flight across the garden, I would be quite content if it missed me out and delighted someone else.

Flight speed has been recorded as 2.5 metres per second with a wing beat of 12 per second. Compare this with other insects. They fly from the early spring until autumn.

Above and below is an adult female Orange tip (the male has the orange tip to his forewings, the female does not) lower down is the adult male. They are found throughout Europe east to Asia and as far as Japan on hedgerows woodlands and damp meadows from sea level up to 1500 m, and right up as far as the Arctic Circle in Europe. Wingspan is 40 - 52mm.

In the U. K. the adults fly from April to June. The greenish white eggs are laid singly on the flowerheads of the foodplant, then turn orange and finally dark violet. The caterpillars feed from June to August, and can grow up to 30 mm long, then overwinter as a pupa attached to the foodplant. Like the Cabbage white above its foodplants are in the Cruciferae family, but unlike the Cabbage white it tends to prefer weeds such as the cuckoo flower, hedge mustard, etc. I rarely see one in the garden.

Above is Phoebis trite, the Straight-lined sulphur, also known as the Buttercup butterfly. It can be found in Central and South America.

Above is the adult Apricot sulphur, Phoebis argante. It has a wingspan of 54 - 67 mm. The hind wings are slightly paler than the brilliant yellow of the fore wings. Females vary from almost white to yellow. It is native to Mexico, Peru, Uruguay and the Caribbean, and is found from sea level up to 1600 m in tropical forests, pastures and road edges.

The Apricot sulphur flies throughout the year in most areas. Adult males sometimes gather in large numbers to drink water that is rich in minerals. Both sexes drink nectar from red flowers.

The eggs are yellow and laid singly on the foodplant.