The Red admiral, Vanessa atalanta, above and below can be found in gardens, the countryside and even in cities, especially on ripe and rotting fruit in late summer and autumn. They are common in Europe, North America and the temperate regions of Asia. Forewing length 28 - 31 mm, wingspan 64 - 78 mm.

The adult above landed on my jeans while I was walking my dog down a country lane. The one below and many others feasted themselves on my bumper crop of plums. While feeding they close their wings showing only the underside, which, like many of the other Nymphalids, is well camouflaged.

In the U. K. the adults arrive each spring from southern Europe and lay their eggs singly on stinging nettle. In June the caterpillars hatch and feed inside a leafy tent held together with silk. A fully grown caterpillar is around 35 mm long.

The caterpillars pupate in July and August inside a leaf shelter and emerge in around 2 weeks. Some then fly south, others hibernate or die. Adult males and females are similar. In the photograph above this adult has been attacked and has parts of is rear wings missing. 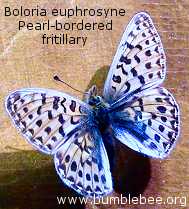 Above is the pearl-bordered fritillary, Boloria euphrosyne also know as Clossiana euphrosyne. The caterpillar hatches in May or June, feeds on violas, and hibernates in a dead leaf in July. When fully grown the caterpillar is up to 25 mm long. It has a black body with a row of white spots along each side. The spines on its back can be black, yellow or white. The head is black. It pupates the following May.

Adult wingspan is 38 - 46 mm, forewing 19 - 23 mm, and it flies in May and June. Its range is Western Europe across Asia to Siberia. The female is larger than the male, and often paler. There is usually one generation per year in Northern Europe and two in Central and Southern Europe. It is found in woodland clearings and edges. Formerly it was widespread in the UK, but is now uncommon.

Above is the dark green fritillary, Argynnis aglaja, also known as Mesoacidalia aglaja. its range extends from Western Europe and Morocco across Asia to China and Japan. It is found in moorlands, cliffs, sand dunes and open woods throughout Europe. There is one generation a year.

Eggs are yellowish laid singly on the stems of dog violet, and hatch in 2 - 3 weeks.

The caterpillar eats its egg shell then hibernates at the base of the plant. It emerges next spring and feeds until June or July. When not feeding it hides beneath the plant. The caterpillar is velvet-black with hairy spines, a yellow stripe along its back and red spots down both sides. When fully grown the caterpillar can reach 38 mm long.

The chrysalis is shiny black and brown and enclosed in a tent of leaves held together with silk.

The adult flies from June to August. It has a rapid and powerful flight. The adult wingspan is 48 - 60 mm, forewing 24 - 29 mm, the females are usually larger than the males and paler in colour.

Vanessa or Cynthia cardui, the Painted lady, known in North America as Cosmopolite has a widespread distribution found on flowery banks from sea level to 1800m. It has been recorded as far north as Iceland.

The eggs are laid singly on the upper surface of the leaves of the food plants - thistles, mallows and nettles - in June and August, and hatch after about a week.

The caterpillar spins leaves together to make a shelter to feed in, and reaches full size of around 28 mm long in a month.

Pupation takes place inside the leaf shelter, and the adult butterfly emerges around 2 weeks later. Adult females tend to be larger than males. Adults cannot survive the British winter, and every year some adults fly from Africa to the U. K. A journey of over 600 miles, flying at speeds of 10 miles per hour! Forewing 27 - 29 mm, wingspan 58 - 70 mm..

The Silver washed fritillary, Argynnis paphia, above, is widespread throughout Europe, absent from southern Spain, and found in the southern half of the British Isles only. It is found in woodland and woodland edges.

There is one generation a year. Eggs are laid singly in July in a crevice in the bark of trees near its foodplant, viola. The eggs hatch after about two weeks. On hatching the caterpillar eats its eggshell, and then hibernates on the tree trunk. The following spring it descends to the ground to find its foodplant. It feeds during the day, and is fully grown by the end of May. The caterpillar grows up to 38 mm long. The pupa hangs from the foodplant, and the adult emerges in two or three weeks. Wingspan is 54 - 80 mm, forewing 27 - 35 mm. The adult flies from June to August, and is a fast and powerful flier. Its common name comes from the bands of silver on the underside of the wing. The photograph above is of a male.