The Dark arches, Apamea monoglypha, above, is common throughout Europe in all types of meadows and grassy areas.

The eggs are laid in July and hatch in around 10 days.

The caterpillar is up to 45 mm long, shiny, pale-coloured with black dots, black plates and legs, and a shiny black head. Its foodplants are grasses, although when it is small it feeds on small flowers and seeds. The caterpillar feeds underground at night from August to the following May or June at the base of grass stems, and hides during the day. It overwinters as a caterpillar in a chamber among grass roots.

Pupation is in the soil and under stones in May to July.

Adults emerge in June and July and fly until August. Adult colouration varies considerably in shade. Forewing length is 19 - 26 mm.

The eggs are laid in batches on the foodplant (see below) in May and August and hatch in around a week.

The caterpillar is found in hedgerows, waste ground, meadows and gardens, and when fully grown has a body length of up to 38 mm. The foodplants include plantains, docks, bramble, thistles, hops, sallow and hawthorn. Caterpillars hatching in August overwinter and pupate among leaf litter the following spring to hatch as adults in May. Caterpillars hatching in May/June pupate in summer, and the adult moth emerges in August.

The Large yellow underwing, Noctua pronuba, above and below is found throughout Europe, and in the U. K. and is common in lowlands. There is one generation a year.

The beautiful adult emerges to mate in June or July and flies until October. It is a fast flier. It has a wingspan of 52 - 61mm and a forewing length of 14 - 17 mm. The yellow underwings are usually kept hidden at rest, and when it is disturbed it will flash them to startle predators.

The very tatty adult below was found clinging to the underside of the lid of my compost bin in August. 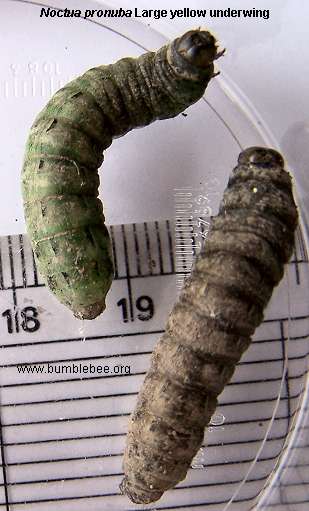 Above are two caterpillars of Noctua pronuba, the Large yellow underwing.

The white eggs are laid in batches on the underside of the leaf of a foodplant in July. They hatch in August.

The caterpillar feeds until the winter, then hibernates and emerges next spring. It grows to around 50 mm, but can reach 60 mm, and is variable in colour from bright green to dull brown. All have dark brown bars along the back, and the head also has dark brown bars. Usually it is found by digging in the soil because it hides there during the day, emerging at night to eat the leaves and stems of dandelion, chickweed, dock, grasses, plantains, cleavers and many other low-growing plants.

It pupates in the soil in May. The pupa is chestnut brown, see below a pupa that has been parasitised by an ichneumonid wasp.

Above is the Broad-bordered yellow underwing, Noctua fimbriata. It is easy to see where its common name came from if you compare its rear wings to the Large yellow underwing above. The colour of the adult is variable, but the pattern of the markings doesn't change. This moth is widespread in Europe and the British Isles.

There is one generation a year. The eggs are laid in late summer. The caterpillar feeds in autumn, then hibernates, and continues to feed the following spring. Caterpillars grow up to 55 mm long, and are found in woodland where they eat a wide range of foodplants including, primrose, dock, sweet violet, dead nettle, hawthorn, blackthorn, silver birch and sallows. They feed at night and hide during the day. They pupate on or just under the ground in May, and the adults emerge in July. The forewing length is 22-27 mm.