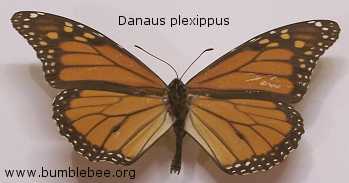 Danaus plexippus, the monarch butterfly, also known as the Milkweed butterfly has a range that covers Peru north into Canada, in Australia, New Zealand, Papua and the larger East Indies, and the Canaries.

The eggs (below) are pale green and conical, and hatch 3 - 5 days after being laid on milkweeds which are the food plant of the caterpillar.

The caterpillars feed on the milkweeds storing the poisons (cardiac glycosides) from the plant to make themselves unpalatable to predators. The cardiac glycosides, even in small doses in vertebrates, induce nausea and vomiting; and in larger doses, death.

The adult above is a preserved specimen. Forewing length is around 47 mm. The adults also have the typical warning colouration of orange/black, as the poisons are still stored in their bodies. These poisons induce rapid vomiting, so that the predator can easily associate the unpleasant experience with the caterpillar/butterfly, and avoid them in future. It overwinters as an adult in thick woods - often on Eucalyptus trees. Its flight speed has been recorded as 2.8 metres per second. Compare this with other insects.

This butterfly is famous for its long-distance migrations, e.g. from Canada to Mexico. The round trip can take 4 generations.

It is found in North and South America, the Caribbean, Australia and New Zealand, and some even stray as far as western Europe including the UK.

The Monarch butterfly is important in eco-tourism in the 2 areas where it overwinters; the Monterey Peninsula in California, and the conifer forests of Michoacan in central Mexico. In these 2 areas there are guided tours to see the butterflies in their dense aggregations. Apart from the tours themselves the tourists must find accommodation, be fed, and often buy souvenirs. All this brings income and jobs into the area that might not otherwise exist were it not for the butterflies. 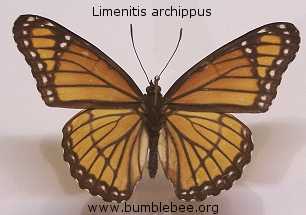 The Viceroy above, ranges from Canada and Eastern US to North Mexico. It prefers shrubby areas near water. It mates in the afternoon and the female deposits her eggs singly, each on an undamaged leaf of willow or poplar, on which the caterpillars feed. The caterpillars sequester the salicylic acid from the leaves in their bodies, so that when a predator eats a caterpillar, the caterpillar has a bitter taste, and causes the predator an upset stomach making it avoid eating other viceroys. There can be three generations in a year.

Euploea mulciber, the Striped blue crow, above, is found in India and South East Asia. The preserved specimen above is a male, the female background colouring is similar but she has white stripes radiating out from her thorax and abdomen across both fore and rear wings. Wingspan is 80 - 90 mm.

Adults drink nectar from flowers. The eggs are laid singly on the underside of the foodplant leaf (foodplants are numerous and include figs). The eggs are creamy-yellow to light green ovals 1.8 x 1.2 mm, and hatch about 3 days after being laid. The caterpillar eats the egg shell, then the younger leaves of the foodplant first. Pupation takes place on the underside of a leaf where the caterpillar suspends itself from a silk pad.

Above is the underside of Obrina olive wing, Nessaea obrinus. It is found in Columbia, Guiana, Bolivia and Brazil. The wing length is 25 - 40 cm for males, and 26 - 41 cm for females. Adults can be seen year round.

The Golden clearwing, Godyris duillia, above, is found deep in the understorey of the rainforests of Peru, Venezuela, Ecuador and Columbia from 200 - 1000m high. It has small eyes, a thin abdomen, and very long antennae for a butterfly of its size, and it has a slow wing beat. It is also know as the Amber glasswing.