These are the chitons, see above and below, and below that for a drawing of the general anatomy.

There are about 550 species, all marine. They range in length from 3 - 400 mm. They are slightly elongate and dorsoventrally flattened. The dorsal surface is covered by eight overlapping shell-plates.

The mantle has a thick cuticle which can bear spines, scales or bristles. They have no distinct head, and eyes and sensory tentacles are lacking.

Chitons have a radula and a large muscular foot. Sexes are separate in most. They have multiple pairs (6 or more) of gills and a posterior anus. It is found around the Galapagos islands.

Chitons are usually found on rocky shores where shape and ability to close down and attach tightly to the surface means they are well adapted to withstand wave action. The colour of the plates usually matches the colour of the surrounding rock. When dislodged they can curl up with the plates outermost, this gives them some protection from predation and battering during storms.

Chitons graze algae from rocks, often after dark. Like limpets they often return to the same site on a rock to rest where their body will have formed a scar enabling a close fit to the rock.

These are the tusk shells see Dentalum elephantinum above. The Scaphopoda are the Class with the smallest number of species in the Mollusca. They are from 2 - 250 mm long and are entirely marine, found in shallow to deep waters; there are about 550 species.

These molluscs have a long cylindrical shell, narrower at one end, and open at both ends. The wide end (the end which the foot protrudes out of) is usually buried head first in mud or sand leaving the narrow end sticking out; water enters and leaves by the narrow end. They have no gills and gas exchange occurs over the mantle surface.

They feed on detritus and protozoa caught on the cilia of the tentacles which protrude out into the water from the narrow end of the shell. They have a burrowing foot, a head bearing a radula and clubbed contractile filaments (captacula) used in feeding, but no eyes or sensory tentacles. Sexes are separate.

Species from the Dentalum genus are fairly common in the Atlantic. 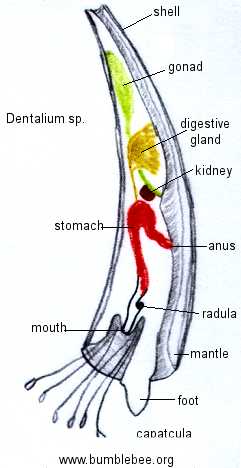 These are shell-less and worm-like. The Class is sometimes called Caudofoveata or Aplacophora. There are about 250 species described and they range in size from 2 - 140 mm in length.

They are all marine and most burrow in sediment, but some creep on corals. They have no foot or shell, and the epidermis secretes chitinous scales or spicules. They have no eyes or tentacles, and the radula is either reduced or absent. Some feed on Cnidarians, and others on small animals or particles of organic matter and detritus. The sexes are separate. 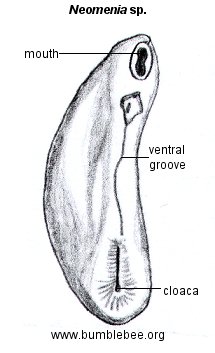 This Class is also known as Solenogastres. Like the Chaetodermomorpha these are shell-less, and worm-like, and some lack a radula. These two classes were formerly joined and called Aplacophora.

There are about 250 species ranging in size from 1 - 300 mm; they are all marine and are often found on Cnidarians on which they feed. The species that live on corals have a ventral groove (see Neomenia, above), running almost the entire body length which is thought to be a highly reduced foot. Those that burrow in sediments do not have such a groove.

The mantle covers the entire body and has layers of scales or spicules beneath the cuticle. They are gill-less, hermaphrodite. 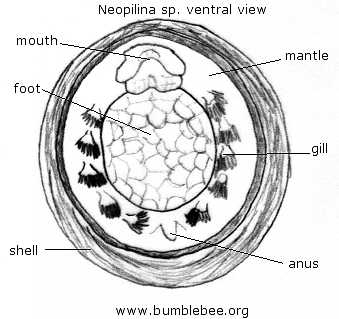 Until 1952 these were thought to have become extinct in the Devonian, and are thought to represent an early form of mollusc. They are all marine and so far about fifteen living species have been discovered.

They are found in deep water from 200 m to over 7000 m. They range in size from 3 - 30 mm. They have a low, conical shell and a weekly-muscular foot, so bear a superficial resemblance to limpets. However unlike limpets they are bilaterally symmetrical. They have five or six pairs of gills, six pairs of kidneys, one or two pairs of gonads and a ladder-like nervous system. They have a distinct head, and eyes and a radula are present.

Neopilina sp. above and below has 5 pairs of gills, 6 pairs of kidneys and 1 or 2 pairs of gonads. 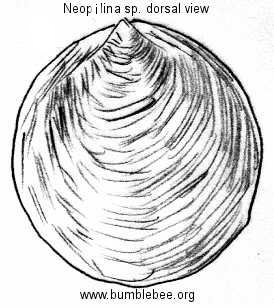