The female pinworm, which is up to 12 mm long, creeps out of the human anus and lays her eggs around the margin of the anus at night. This action causes itching and scratching by the human. The eggs are caught under the fingernails, and easily spread to other humans or back to the original host. Eggs can also be inhaled with dust or licked off fingers which have touched dusty surfaces. The most common worm parasite in the modern affluent areas of the world. 30% of US children are estimated to be infected, however infection causes little harm in a healthy human. In Taiwan studies have shown that those infected with pinworm are less likely than uninfected members of the general population to have hay fever (Clinical Experimental Allergy, vol 32, p1029). 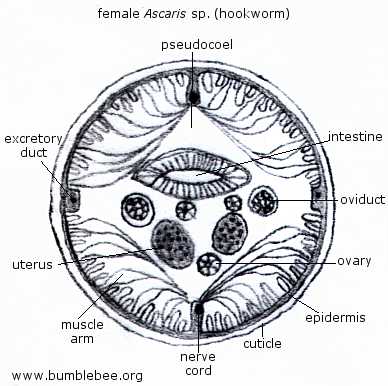 Eggs are eaten with contaminated food. Infection is common in some rural areas of the US with up to 60% of the population infected. Common in southern USA and other areas of the world. It is said that as much as one sixth of the world's human population is infected by Ascaris sp. alone. See the cross-section of a female Ascaris above, and a male and female Ascaris inside a pig below.

Ascaris life cycle. Ascaris sp. adults can range from 2 - 35 cm long, and 5 mm in diameter, with the male slightly smaller. The female can lay 200 000 eggs a day, and these have thick resistant shells. The eggs pass out of the host in the faeces. If the egg is swallowed by another host, the host's digestive juices dissolve the thick egg shell and liberate the young worm. The young worm then burrows through the intestinal wall into the veins, and is carried to the heart and lungs. It then breaks into the alveoli, climbs the bronchial tubes, and up into the trachea. A heavy infestation can cause pneumonia at this stage. Finally the juvenile worm is swallowed, passes down into the stomach and returns to the alimentary canal again where it matures and spends the rest of its life.

From ingestion of eggs to maturity takes around two months.

A small number of worms in an otherwise healthy human won't do too much harm, but they can cause an allergic reaction. Large numbers can cause blockages in the intestine, perforations, anaemia and lack of energy. Severe infestations can result in mental retardation. Ascaris lumbricoides infestations are a leading cause of impaired childhood development amongst the poor. Ascariasis is thought to affect around 4 million people in the USA.

Wandering worms can be passed with faeces, can be coughed up, and can even enter the middle ear.

Usually the first indication of infection in areas where hygiene and sanitation are good, and the infected person is healthy is finding a worm in the toilet as you are about to flush. Many people ignore this thinking the worm is an earthworm that somehow made its way up through pipes. It is too much of a shock to them to believe that it came out of their bodies.

Ascaris infections are easily cleared up with modern medicine if treated promptly. The most common cause of infection in the affluent world is eating contaminated food while on exotic vacations, and eating the eggs in uncooked vegetables. In children infection commonly occurs when they put contaminated fingers or toys into their mouths.

Juveniles in the soil can burrow into human skin. The eggs are usually eaten along with food. However, it appears that hookworm infections in humans are not always totally bad news! They have been shown to lessen the allergic effects of pollen in hay fever sufferers (The Lancet, vol 308, p686), and in Ethiopia ascaris infections reduced the severity of asthma. (The Lancet, vol 358, p 1493) . Nector americanus females are up to 11 mm long, and males 9 mm long. Heavy infections can result in anaemia.

Infection occurs when eating infected meat, and can result in the potentially lethal trichinosis. Just over 2% of the U. S. population is infected.

Infection occurs when eating contaminated food, or through unhygienic habits. This parasite tends to be found in areas where Ascaris sp. is also common. Adults live in the intestine, but the larva burrow through the gut wall into the muscles causing cysts which can cause great pain and even death.

This nematode lives in the subcutaneous tissues of man. The worm migrates and if it passes across the cornea of the eye it can be seen - hence its common name. Some believe that this is origin of lovers gaze into each other's eyes as an infected partner would not make a good mate. Infection can lead to blindness. It is transmitted by black flies (Simulinum), and deer flies (Tabanidae).

Occurs mainly in Asia and Africa. In humans infection occurs from drinking water containing Cyclops which have been infected by the worm. The worm larvae in the cyclops hatch out and penetrate the human intestine. Eggs are passed out of the human when a gravid female migrates to the skin and causes an ulcer. When this ulcer comes into contact with water the free-swimming larvae are released. The larvae swim until they either die or are eaten by a cyclops.

A mature female is 1 mm in diameter but can reach 120 cm in length.

In the Old Testament it is referred to as the "fiery serpent".